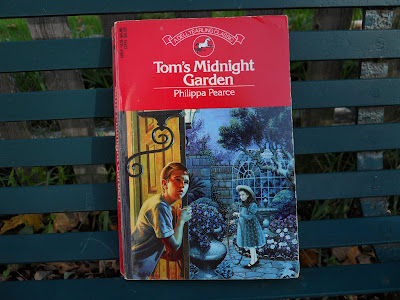 
After wimping out on a couple books I thought I'd read for the RIP VI challenge, 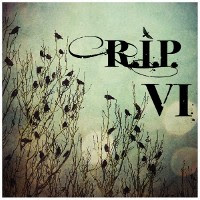 I got the brilliant idea that maybe a children's book would be a better choice for me. I don't mean young adult, but that glorious genre for young readers which lies between picture books and teen books, referred to as juvenile fiction. The ages listed on these books are either 9-12 or 10-14. That's just about right for my comfort level with ghostly, creepy sorts of stories.

I went to the upstairs bookshelves where I keep the books from Tom's and my childhood, and Margaret's and Michael's childhood. 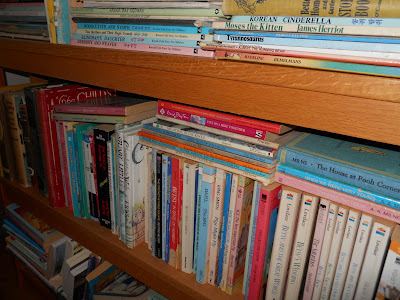 My eye fell upon Tom's Midnight Garden, a book I've been meaning to read again, having read it years and years ago to my kids. And I thought this would be just the ticket! I really love this story.

The book begins with 12 year old Tom Long having to leave home because his brother Peter has come down with the measles. He goes to stay with his aunt and uncle in another town so that his mother may devote her time to her sick son. Tom also must be in quarantine for a while so that he won't give the illness to anyone else.

Tom is greatly distressed because he and Peter had looked forward to playing in their back garden during the summer holidays. They had plans to build a tree house.

When he arrives at Uncle Alan and Aunt Gwen's house, he sees:

a big house now converted into flats. The house was crowded round with newer, smaller houses that beat up to its very confines in a broken sea of bay-windows and gable-ends and pinnacles. It was the only big house among them: oblong, plain, grave.

Aunt Gwen is a cook of 'large, rich meals,' and they, combined with no exercise other than jigsaw puzzles give Tom some uncomfortable sleepless nights where the striking of the grandfather clock in the main hallway is his only companion. After getting up and prowling around and being discovered, his Uncle Alan makes him promise to stay in bed for ten hours.

The old clock never strikes the correct hour, and when Tom hears thirteen he is startled, and 'uneasy in the knowledge that this happening made some difference to him; he could feel that in his bones.'


The stillness had become an expectant one; the house seemed to hold its breath; the darkness pressed up to him, pressing him with a question: Come on, Tom, the clock has struck thirteen - what are you going to do about it?

With a child's reasoning, he decides that there is now an extra hour in the day, and that he can stay in bed for the promised ten hours, and still have an hour to himself to get out of bed and explore. Because he is such an honorable and obedient child he goes downstairs to make sure the clock really says thirteen, allowing him this freedom. He feels for the light switch, and can't find it. He decides he can use the moonlight, but it is dim and he thinks if he opens the back door more light will beam through so he can see the clock face. He has been told this door leads only to a paved back yard with rubbish bins. But… what he sees is a big lawn and flowerbeds and trees and a greenhouse. His immediate response is that his aunt and uncle have lied to him. But then he begins to see and experience strange things. A maid dressed in old-fashioned clothes cannot see or hear him. He looks back into the hall from where he came and sees it completely transformed from a central hall in an apartment building to a grand hall in a family house.

And so, our young hero's adventures begin. The reader moves right along with him night after night, completely believing in all that happens. We may wonder a bit more than Tom does, but we still don't question the occurrences. We meet a girl around Tom's age, Hatty, who can see and hear him. She accepts him in his new-to-her pajamas, as he accepts her and the garden.

In an afterward to my Dell Yearling publication of Tom's Midnight Garden, the children's book author, Zilpha Keatley Snyder explains just why the reader shares Tom's adventures without doubt or disbelief. She tells how she loved fantasy stories as a child, but that some let her down because they didn't follow her 'rules.'


The first rule was NO NONSENSE.
The second was NO TREACHERY.
NO NONSENSE meant that the magical and wondrous should be built on a foundation of lots of convincingly realistic details, and that magical events or powers had to be limited in understandable ways.
RULE TWO… What I really hated was a fantasy in which the magic was all TREACHEROUSLY taken away at the very end, as when the ghost turns out to be somebody playing tricks, or worst of all, a whole magic adventure turns out to be a dream.
Now, it's perfectly obvious that Tom's Midnight Garden follows both of these rules to perfection. One is completely caught up in Tom's everyday life when the first little hints of strangeness, the grandfather clock and the old house itself, begin the subtle preparations for magic. And by the time of the first visit to the midnight garden, one is ready to think, of course. That's exactly what had to happen.

I give you this extended report of the beginning of the book, and then Zilpha Keatley Snyder's words to show that you too may believe. It isn't even a matter of suspending belief. One simply believes. And what a story we fall into. Each night that Tom visits something or someone is a bit different. What is just a night to him is often much longer to Hatty. Is he a ghost or is she? What is happening to time? These are the big questions, but there is also unquestioning delight in the fun these two lonely young people share. They both know that their circumstance is not usual, but they can forget it for a while in their quest for adventure.

Philippa Pearce was awarded the Carnegie Medal for Tom's Midnight Garden. It is worth scrolling down that page to see all the other winners.

I love these photographs of her. 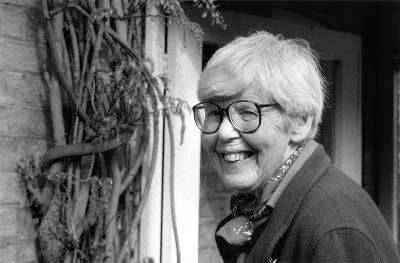 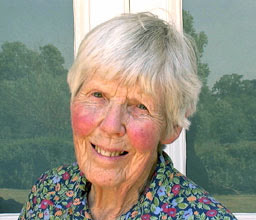 There are two obituaries of Philippa Pearce here and here. There was a celebration of the 50th anniversary edition of this book here.

And you may find another review of Tom's Midnight Garden here.

I own another book by Philippa Pearce which I plan to read again next year called Minnow On The Say, and I hope to get more of her work. She was a wonderful writer.
Posted by Nan