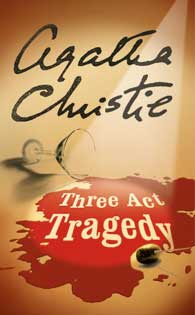 Three Act Tragedy is one of my favorite Agatha books so far. Mr. Satterthwaite is one of the main characters, and I learned from my Who's Who that he makes an appearance in a few other stories and books: 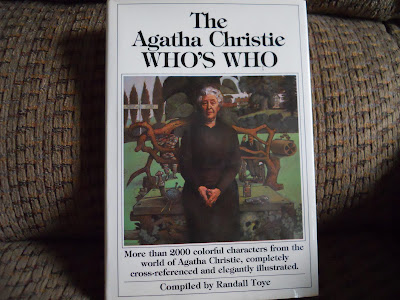 The Mysterious Mr. Quin, Dead Man's Mirror, The Love Detectives, and The Harlequin Tea Set. He is attending a party given by a retired actor who has moved to the seaside. A beloved local rector suffers a seizure and dies after drinking his cocktail. Though everyone is terribly upset, it is declared an accident. He was in his sixties and had been having some health problems. But the host of the party, Sir Charles Cartwright meets with his doctor friend Bartholomew Strange and Mr. Satterthwaite, and expresses his concern that it might be murder. He is upset because he is the one who mixed the cocktails. When another death occurs in the same manner some time later, with many of the same people present, it begins to look like he had reason to wonder.

The book is set up like a three act play.

Yet another new way of presenting a mystery. There was no moss growing under Agatha Christie's feet. She is adventurous in her writing, not sticking to a formula, always coming up with something new. People often refer to a 'typical' Christie book where all the suspects are brought into a room and the detective presents the story of what happened and whodunnit. Yes, this does often happen, but before the denouement each book is different in presentation, characters, and plot. I've written it before, but I do proclaim this woman was a genius.

Apparently this book isn't viewed as one of her best, but I do not agree. I found the characters very interesting, particularly Mr. S. I liked 'listening' to the conversations between these men. The book also features one of my favorite Agatha Christie 'types' - the plucky, strong-minded, energetic young woman. In this book she is Miss Lytton Gore who has the nickname 'Egg.'

I've seen the title hyphenated, and presented without the hyphen. As too often happens in publishing, the book has another title in England, Murder in Three Acts, which I actually like better. But in this case, not only is the name different but the two editions differ in the motive of the killer. I read an explanation online but I won't offer it here because it gives away too much of the story.
Posted by Nan