Death by Gumbo by Phil Edwards 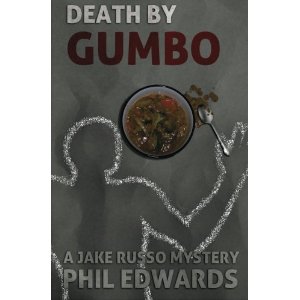 63. Death by Gumbo - second in the Jake Russo series

Well, I liked Retirement Can Be Murder but I loved this one. Our journalist/photographer team have been sent to New Orleans, and Jake Russo has a new job as a food critic. He knows nothing about food except that he used to eat too much of it, and too much of the wrong kind. In the first book it said he had lost 75 pounds, and now he's up to 100. But this new job is challenging to say the least. A restauranteur puts four crepes on the table with different sauces and he has to eat them. He's afraid of falling back into his old ways.


In this book we get to know Gary Novak, the photographer a lot better. He has a very famous blog, of which Jake knows nothing. It's so famous in fact that he has offers from newspapers who want to buy it. He ends up selling the rights to the paper which employs them. There may be a book, and possibly a tv show. He's an interesting character. Not young. Not handsome. Happily married, though he's far apart from his wife in this story. She's in Sarasota and he's in New Orleans. This is a problem for Jake, too. He and Melissa whom he met in the first book are now a couple, but they fear they can't keep the relationship going with such distance in between.

Gary uses words in a different way; wrong but still effective, descriptive, and more fun than the 'real' words, like 'ogle' for blog. He calls himself a 'food ogler.' He says 'mistalked' for 'misspoke.' Just one of the traits which make him a delightfully quirky character. And no one knows what kind of an accent he has.

There's a new restaurant in town called Element. This is not your typical New Orleans restaurant. Can it possibly succeed?

"It's a battle," he said and sighed. "This city is resistant to change. It loves seafood. I hate it. It loves a guess and I prefer a formula." … "That's the promise of molecular gastronomy. To replace heat with intellect. Chaos with order. Mess with precision."

Much of it is manufactured food. There are test tubes and bunsen burners. The Periodic Table is on a wall.

"What you're going to do," the waitress said, "is pour your test tube onto your plate. The liquid congeals into a tomato and corn flavored paste that you can eat with a spoon. It's like a chip and salsa in one."

And the biggest difference is that there's no shellfish, the food New Orleans is known for. Chef Kyle is deadly allergic to the stuff, and carries his epinephrine pen with him at all times. No one but Jake seems to think it odd when the man dies after eating gumbo (which always contains crab). Why in the world would he eat the stuff? And why didn't his epi-pen work? We learn that he is looked upon as a 'carpetbagger' - someone who is moving in and trying to fundamentally change the city. The police don't care much and don't look into the case. Jake becomes friends with a cop who says if he can come up with strong evidence of misdeed, then she can investigate. Yes, she. Think this might cause a problem with the aforementioned Melissa?

In the meantime, Jake's car engine is filled with dead crabs, and the apartment he and Gary share is blown up. Thankfully no one is injured. Someone doesn't want them looking into this case.

One of Gary's great gifts is 'perfect palate.' He remembers the way food tastes and the separate flavors in a dish, and this gift actually helps solve the case as Jake and Gary eat their way around New Orleans searching for a particular crawfish sandwich.

"It's a delicious crawfish sandwich. There is a hint of peanut in this. Perhaps some chocolate even."
"This tastes like shrimp, red bell peppers, and a little jalapeno."

This was a great story. And especially interesting to me because Tom and I recently finished watching the first season of just about the best thing we've ever seen on tv - Treme. If you haven't seen it, rent or buy it as soon as you can. It is fantastic. Set in New Orleans a few months after Katrina. I learned so much about the food, the culture, and the music. Oh, the music. It is as much a character in the story as the people. Many real musicians are in this show. It was fun to have a little reading visit there so soon after my television visit.

This is a wonderful series. There are a few places you can find Phil Edwards: here and here and here. His books are interesting, informative, and most importantly humorous. I love humor. There's not enough good, gentle humor in the world. Give yourself a treat and try these books and see what you think. On his website, the author says:

I read the occasional thriller and crime novel. But when it comes to mysteries, I prefer reading old stories by Agatha Christie to modern day torture puzzles. When I wrote these stories, I wanted to mix the tone of a PG Wodehouse book with light Agatha Christie intrigue.

He has succeeded admirably!

With this book, I have completed the Foodie's Reading Challenge. It has been such fun reading food related books over the past few months. I am so hoping Margot offers it again next year.