September with Gladys and Rachel 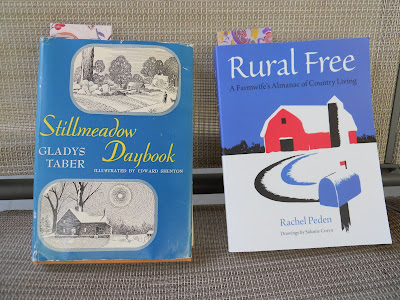 To learn more about this yearlong adventure with Gladys Taber and Rachel Peden, you may scroll down to the 'letter topics' and click A Year with Gladys and Rachel.

September begins and ends so differently. I often feel energetic and hopeful at the start, and a bit pensive and introspective as it ends.

Gladys' September chapter is decidely on the pensive side. She notes a few observations from the natural world but most of her writing is concerned with more philosophical leanings. I think this isn't unusual for her. Though she is a country woman, her housemate Jill does most of the actual yard and garden work. Presumably this is because Gladys was busy with her writing. She does picnic and swim and walk and dream outdoors, but she always thinks and thinks, and shares her thoughts with us.

Seeing the school bus, she ponders the difference in school lunches since she was a child. She writes about a school in Mississippi which she supports. I looked it up and it is still in existence - The Piney Woods School. She ponders the conditions of the world and the place of education in that world. She defends the work that teachers do, and bemoans the small salaries.


Some people think teaching is such an easy job, it doesn't deserve the pay of say a bricklayer. Or a laundry delivery-man. Besides, look at those long vacations!
If there be a more arduous job than teaching well, I cannot think what it might be, except to be president of this torn and confused country. In the first place, teaching has to be creative, it has to deal with the countries of the mind which are always difficult, unpredictable, illimitable. It has at once to encourage the dull and slow to their highest understanding and satisfy and ease the burning hunger of the natural scholar. It has to be profound and yet not tedious for the young are impatient. …
Now this long vacation is another thing. This is the time when teachers should be studying and doing research and refilling the well of inspiration. Instead of that, many teachers work. I know of men teachers who do carpentry, hire out as painters. Some clerk in grocery stores. Women tutor or do secretarial work or act as companions to elderly folk.

The summer work experiences may be different now, but there are still a whole lot of teachers who must work in the summer. Even Tom, who doesn't hold a paying job in the summer, spends the long days doing work that we would have to pay someone to do (and hence would not get done) if he didn't. He definitely gets recharged for the school year but it is in doing manual labor outdoors, not in 'refilling the well of inspiration.' I think he read one book all summer!

As I've said many times, the joy of reading older books is in seeing how social and political life was then. Gladys said something that startled me.


When I read about the inter-collegiate debates and that several colleges withdrew their teams as soon as the subject was stated "We should recognize Red China," I was too shocked to speak. One president said quite plainly that he feared if his team drew the positive side, fifteen years hence one or more of its members might be investigated as subversive.

On a lighter note, she writes of taking the dogs to a dog show. She and Jill were very committed to this, and in fact have at this time 'twenty-four Obedience degrees.'

She ponders why sorrows and troubles afflict us, but is centered and consoled by her home place.


The night is full of dreams, as only a September night can be. I feel as if I could hold life in my hand, distilled and crystallized like a special jewel. Here is all the loveliness there is, all the peace, all the joy, all at once realized. Such moments come rarely and come completely. I could, I feel, gather a bouquet of stars and put them in a milk-glass swan compote and they would be there forever.
However, what I really do is to go in with a whirl of dogs and start a good steaming corn chowder …

And this describes the woman perfectly. She thinks the 'big thoughts' but is practical and down-to-earth at the same time. Gladys Taber is a constant joy to read. If you haven't met her yet, she could change your life for the better. I know she has changed mine.


As I said last month, Rachel Peden begins the book with September.


A farm year has, actually, no beginning and no end. Like an old-fashioned roller towel, it begins any place a farmer can get a hold of it. Moving to a new farm, he tries to get there by the first of March, to start his spring work. Or he goes in the fall, having sold all the corn and hay, machinery and livestock he can spare, and leaving the last of the garden to its weedy fate. But for farmers who have children in school, the year begins when school begins. ... a new routine settles down over the farm.

Rachel's main preoccupations as she writes are the creatures and plants of the natural world. Her philosophical writings spring from them. I love this passage about the 'canning moon.'


Farm kitchens are fertile with bushel baskets of green beans, tomatoes, cucumbers, cabbage, corn, or flat baskets of purple or green grapes, all to be got ready for freezer or pressure canner.
A farmer bringing in the morning milk is likely to find the kitchen floor carpeted with corn husks, and from the hog lot comes the happy, gluttonous chompings of hogs stowing away the milky, close-shaved cobs. By these signs the farmer knows freezer and cellar are waxing full.
At noon he will know it even more. He can tell by whatever is in the big, fluted, white ironstone dish just what phase the canning moon is in. In the sign of the green bean, dinner will be green beans and bread and butter. The next day, crescent in the corn phase, dinner will be roasting ears and bread and butter. The third day, in the sign of succotash, dinner includes sliced tomatoes. After so long without pie, a farmer waxes hungry. Even so, he fares better in the canning moon than in the house-cleaning moon, in which there is no assurance even of bread and butter to eat.


And the common cricket:


The song of the cricket is said to instill a note of content into a house. It does, of course, if you are the cricket. It does also, to some extent, if you consider that the voice of the cricket in today's complex world is just the same as it was in an earlier American era, or even in a much more remote civilization. ... The voice of the cricket is a theme of reassurance carried from an ancient civilization into our modern one. If I ever have to dive for survival into an underground shelter, I hope there will be a cricket familiarly "ye-up, ye-up, ye-upping" there.

As with Gladys in her passage about the debating, here is Rachel writing of 'underground shelters.' I fear that we all look back at the middle 1950s into the early 1960s as a peaceful, less stressful time. It wasn't. Just as in another sixty years, people will probably look back at our time as such. When you read a book set in the time, you see how people thought and lived then. People have been happy and worried, contented and fearful always. And this can give us great consolation. I know it consoles me, and gives me a sense of peace in my own time.

Rachel goes on to muse about 'sinkholes,' what we might call 'dumps,' on the farm.


It is the final destination of the worn-out washing machine or the broken-down gas stove, the obsolete cream separator and brooder stove ...
Farmers are reluctant to abandon anything irretrievably. They say "it might come in handy sometime" and let everything accumulate in tool shed, warehouse, or barn until finally a Time comes. ... The sinkhole is ringed with items abandoned on this comforting policy.

Our barn serves this purpose for things that could be useful and are not quite useless yet. But outdoors, up the road and barely hidden, are such things as our old red mailbox - which was actually featured on the blog a couple times, here and here. It may be rustic and appealing but it leaks. 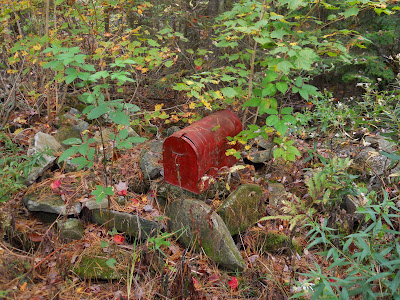 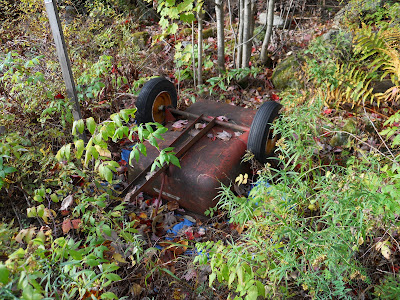 or the tiller which served us well for ages, but which we shall never use again now that we have raised beds in the garden. Tom's thought is 'well, Matt might need it.' I don't think so. They've begun their gardening lives with raised beds, saving themselves the stress and strain and plain hard work of tilling. 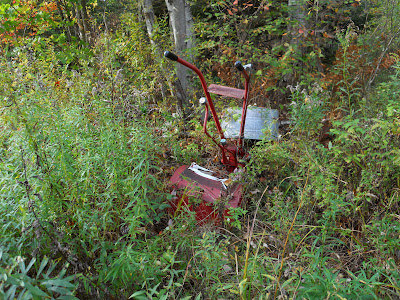 or the worst of all, this old wooden garden cart that frankly I didn't even know was there until I went exploring to take these photos. It is growing into the land. 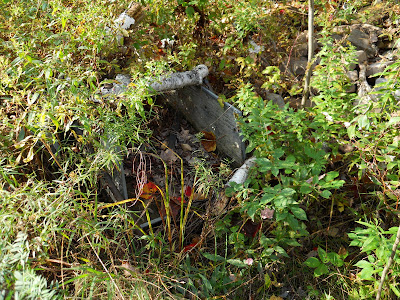 I can't imagine what Tom is thinking, but somewhere in his head, like inside Mr. Peden's, there is the idea that maybe, just maybe there shall be a use in some far future time for a rotten wooden cart. Which connects me to all those years ago when Rachel was alive and writing about her farm in Indiana. And makes me happy.
Posted by Nan