Retirement Can Be Murder by Phil Edwards 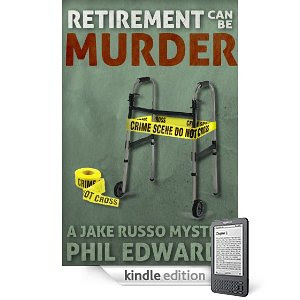 This is a title which Amazon recommended, and since the price was 99¢, I thought why not. I found it to be a very pleasant cozy mystery with a promising lead character, Jake Russo. He has been demoted to Sarasota to write 'puff pieces' on the joys of Florida which New York City residents may look forward to when they retire. I really liked this reporter. His editor clearly doesn't think much of him, or expect much from him. He also doesn't know him very well. Jake has lost 75 pounds since moving to Florida. He has cut out the junk food he was famous for in New York, and he's now a runner. All of us have a food that is more tempting than any other. For me it is french fries. For Jake it is cream soda.


He'd sworn he wouldn't do it. He was going to turn over a new leaf. He'd bought the bottle on a dark day a few weeks ago and kept it there. He'd never opened it and he knew he should throw it out. But he couldn't. He went into the fridge, pushed aside the jugs of mineral water and the containers of Diet Vegetable Juice, and there it was. ... when you poured cream soda, you could smell it and see it sparkle. He used to drink a bottle a day - he deserved a taste.

This time Jake is saved by the phone ringing.

When he is working on a piece about a retirement community's landscaping, a resident approaches him and says she has a story for his paper. She tells him, not asks him, to come by her building. He says he will but he is in no rush, expecting nothing important. When he and his photographer, Gary sit down to talk with Charlotte, she asks that Jake keeps confidential what she has to say. She tells him that she is no longer invited to the weekly bridge games which she has attended for five years. When he doesn't seem impressed, she says:


"I think you should write a story about this Mr. Russo. It has betrayal. All of a sudden everyone hates me. It's Shakespearian." ...
"I'm making waves in this community, and nobody else here likes it. Your readers should know. ...
"I received a threat on my life."

This last sentence catches his attention, and he begins to take Charlotte seriously. But before long, Charlotte is found dead on the beach. It looks like a peaceful death, to be expected in a woman of her age, but Jake thinks she was murdered and begins an investigation on his own.

The book delves into the world of condo developments, the loss of land to those developments, and the lives of the people who live in these communities. Along the way, we get to know Jake, Gary, and a woman Jake is beginning to care for, Melissa. Though there are some scary moments for some of the characters, the book is mostly warm-hearted and humorous. The mystery is a fine one, but these three main characters and the others we meet are really the soul of the book. I enjoyed it very much, and have already bought the next one, Death By Gumbo.

We visited Tom's parents when they lived in Sarasota in the spring of 1999, and found it a lovely city. We drove out of town a bit to see an orange grove. By the next year it was gone, cut down completely to become yet another condominium development. This book offers a true picture of this situation.

I'm sorry to say to those of you who do not have a Kindle that this is the only way the book is available. Maybe it will sell so well that someday it will be published in print version, or perhaps that isn't a goal anymore.
Addendum: I stand hugely corrected! There is a paperback version! Why didn't I know this? :<)