Through the Grinder by Cleo Coyle 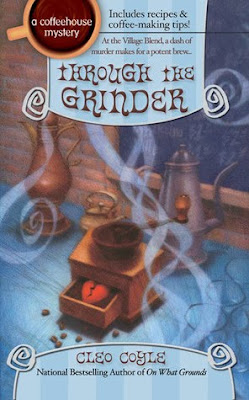 60. Through the Grinder - book 2 in the Coffeehouse series
by Cleo Coyle
mystery, 2004
Kindle book, 37
ninth book for the Foodie's Reading Challenge
finished, 9/4/11

For me, a good sign that a series is going to go the distance is when the second book is as good as the first. Through The Grinder is an excellent installment in the Coffeehouse series. It is darker and more disturbing than On What Grounds. The murderer stakes out the prey, and the reader sees it happen. This killer is full of hatred and venom toward the victims. Two women customers at the Village Blend commit suicide one after the other. I was pleased to see that the policeman we met in On What Grounds, Detective Quinn, is back. He doesn't think they took their own lives. They were happy young women with no signs of problems.

Meanwhile, life goes on at the Blend with a twice monthly event put on by a local church called Cappuccino Connection night. It is a way for people to meet potential romantic partners through five minute encounters. This 'speed dating' as well as online dating sites play a large part in this book. I know people have met great partners this way, but I think I'd rather be single than get involved in any of them.

When our heroine Clare Cosi's daughter Joy becomes interested in the idea, Clare decides to attend to make sure the men are alright for her daughter, while saying she is doing it for herself. Much to her surprise, she does meet someone quite appealing. This meeting sets off a chain of events in which the Cappuccino Connection connects more than prospective couples. It also provides a connection to solving murders!

I've noted before that a trait of some cozy mysteries is that the amateur sleuth gets herself into circumstances most of us would run away from. In the last book I was pretty happy because Clare didn't do this. In this book, however, she gets herself involved in what could have been a very dangerous situation. She believes in her own instincts and proceeds against the advice of Detective Quinn. I like it that she trusted herself, but I thought she was a bit too trusting in someone else.

But still, I loved the book. I enjoy the people who work at the Blend and the customers who come in for coffee. And most of all I love Clare Cosi and her family and friends. She's a wonderful person and, as I said in the book report on the first book, she's someone you'd like to have as a friend.

Now I shall show myself as the book geek I really am. Because Holiday Grind is the eighth in the series, and I like to read holiday books as December approaches, I have set myself a little Coffeehouse reading schedule. My plan is to read the third book in the series, Latte Trouble in January, Murder Most Frothy in March, Decaffeinated Corpse in May, French Pressed in July, Espresso Shot in September, and Holiday Grind in November. Then in 2013, I'll read Roast Mortem and the book I won in the drawing, Murder by Mocha. And probably there will be a new one coming out that year as well.

This is my ninth book for the Foodie's Reading Challenge. If you are interested in food related books over several genres, please do visit here and click on the tabs at the top of the page.

I meant to tell you that in addition to winning the drawing for Murder by Mocha, I also won this adorable cup and saucer! The company has an online store, if you are interested. 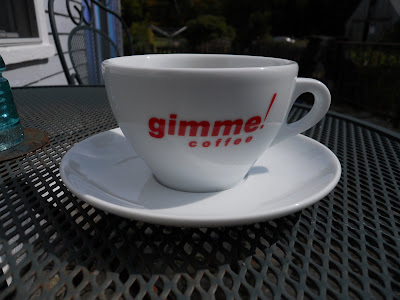 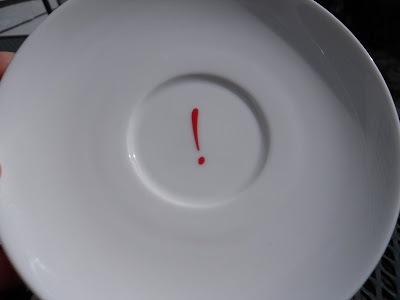 This series has been bad for my pocketbook. In the first book I read about Kona coffee so thought I'd try some. Well, I'm here to say it is the smoothest, most delicious coffee I've ever tasted. But it is really expensive. I limit myself to a couple cups a week. This is the kind I've been buying.