The Arrivals by Meg Mitchell Moore 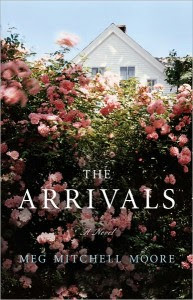 
When I read Marcia's review and her quote from The Arrivals, I knew I had to read this book. How could I not, when the woman is my age, with children near the ages of mine, living in the same part of the world?

There are so many joys in this book that I barely know where to begin. The story is such a real one for those of us with adult children. Some parents have children who live far away, whom they don't see that often, while others have kids who live nearby. In the case of Ginny and William, their children live in Massachusetts and New York City, neither place too far away from Burlington, Vermont. The author describes well the benefits and drawbacks of both situations.

There's a character in the book whose son lives in California. She speaks of her grandchild.
"She's ten now," said Lois. "In a blink, she'll be a teenager. And then what? Then I'll never know her."

And later on, at Ginny's book club meeting:

"I don't have an opinion [on the book] at all," announced Ginny at her book club meeting the following week. "I could barely concentrate on it. My house is completely full. I can hardly complete a thought, never mind a book."
"I'm sorry," said Myrna kindly. "But I can't sympathize with you at all."
"No?"
"No. I beg my children to bring the grandkids, but all I get is excuses. Buffalo's so far, they say. Or they have swimming lessons. Or this and that. I'd give anything for a full house - "
... "And you a widow," said Hedy. "They should be here all the time, looking after you."
"I don't need looking after," said Myrna. I do very well looking after myself, thank you very much. But the company I could use."
... "The companionship would be nice," she added. "I'm not saying all the time. But occasionally."
... "Well," said Hedy. "My grandchildren live around the corner, and believe me, there are times when Buffalo doesn't sound like such a bad thing."
"Hedy," said Alice, "what a thing to say."
"Not if you heard the noise," said Hedy. "My God, but they're loud!"
... "And it's not just the noise. It's something more. It's my daughter! It's the way she assumes that I'm available for babysitting. It's 'I have a doctor's appointment, I'm just going to drop them off.' Or 'Just a quick hair color, can you come over for an hour?'"

The first child to arrive home in Burlington is the oldest, Lillian. Her husband has had an affair, and she feels deeply betrayed. She has a little girl, and a baby boy. She doesn't tell her parents what has happened, and to their queries of when is Tom going to arrive, she answers that he is tied up with work. Not only is she dealing with this pain, but she's also at that stage of parenting which is all encompassing. She is on call every second of the day.

Then the middle child and only son, Stephen comes with his pregant wife. Jane is a city person, a woman pretty much absorbed in her work, a woman Ginny has never felt close to. Unknown to Ginny and William, the plan is that after the baby arrives, Stephen will stay home while Jane continues to work, since she has the better paying job. While they are in Burlington, there is a medical crisis and Jane must stay in bed.

In the midst of all this activity, we meet the youngest, Rachel. Her boyfriend is gone, she can't afford her apartment, and it seems as if her job may go nowhere. She asks for and receives money from her dad, without his wife's knowledge. And when it all gets too much, she also comes back home.

I found myself throughout the book thinking of a line I jotted down from an episode of the wonderful television show, The Middle. 'What is it about being at your mom's house that lets you completely relax?'

I see it in my own kids. They haven't lived at home for seven and ten years, but have lived close by so that they are often here. When they pop in, I can see them become young again. They do 'completely relax.' They eat out of the fridge, they slump into chairs, they occasionally nap.

All this hustle and bustle, accompanied by the emotional situations the children bring with them, create quite a change from the quiet life Ginny and William have been living. Sometimes it is hard never having a moment's peace, but for the most part they like having everyone home again.

There's a beautiful scene where Ginny is the only one awake in the house, and it brings her back to when the children were little.

Standing there, she was reminded of nights just like this - summer, warm, the humidity still trapped cozily around them - when the children were young and she stood in this very spot after closing up the house for the night. Listening. Feeling all the life on the other side of the [bedroom] doors.
She knew she'd been tired so many of those nights; she knew her mind, cluttered with an ever-expanding to-do list, had already been leaping ahead to the next day and the day after that, sorting out meals and activities and carpools and all the rest of it.
And yet! Standing there, hearing only one or two lonely crickets outside in the yard, she felt a certain fondness and longing for that younger incarnation of herself, and also for the children she and William had ushered into the world from the cocoon of this old house.

From the passages I've quoted you may be misled into thinking The Arrivals is all about the parents' view of these adult children coming home. I've focused on them because they are my peers. But the author does an amazing job of presenting the lives and viewpoints of Lillian, Stephen, Jane, and Rachel. By the end of the book the reader knows each of them very well. This is Meg Mitchell Moore's first book. I think she's a wonderful writer and I look forward to more great books from her as the years go on. She is most gifted, with an ability to get into the heads of all her characters, even the little girl Olivia.

The book is nicely divided into June, July, August, and After, which made it a perfect summer read for me. There is no tragedy. There isn't a dysfunctional family. There are simply good, interesting characters who are all trying to find their ways at their own particular stages of life. The book ends with William and Ginny outdoors on the deck after the children have all gone. It is such a beautiful scene.

She and William stayed on the deck as late afternoon tiptoed out and evening quietly took its place. William closed his eyes and dozed, but Ginny did not. She was hungry, but she made no move to get up to prepare dinner. She just sat very still in her chair and waited, listening. This is what they didn't know about, the peace that came with having it almost finished. This you couldn't know about ahead of time. She hadn't known, and wouldn't have believed anybody anyway, even if anyone had tried to tell her. She knew only now.
Finally the sunset came on, and then the darkness, and nobody moved and nobody made a sound and nobody called back. [the phone had rung and they didn't answer]