The Lake of Dreams by Kim Edwards 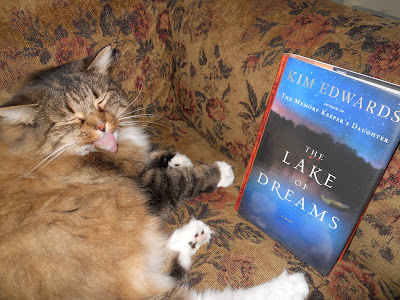 Raya doesn't look wildly impressed with The Lake of Dreams, but I sure was! This was such an interesting book to read. I learned a great deal about many things I knew nothing about before - the Finger Lakes region of New York state; the suffragette movement which was so active there; stained glass and blown glass; a government depot built on land bought from the local residents, which is now deserted and where the only population of white deer exists; 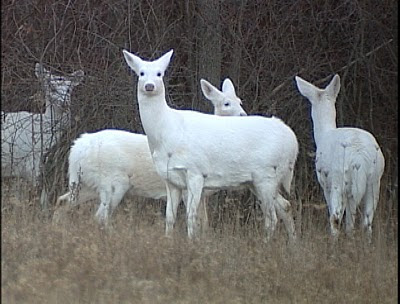 and even a bit about lock smithing. A perfect book for me is when I get involved in the story and the characters, but also learn something new, and The Lake of Dreams fits the bill. I loved it so much that I bought my own copy. It is for sale at Amazon for under $6 in hardcover.

Lucy Jarrett is in her late-twenties. The defining moment of her life is the loss of her father when she was 17. Lucy's grief over her father's drowning death is magnified because she feels guilt and responsibility. The night it happened she had just gotten home from a date with her then-boyfriend, Keegan Fall.


My father was out in the garden when I turned toward the house. Moonlight caught the gray in his short hair; the tip of his cigarette burned, rising, falling. Lilacs and early roses floated in the darkness. Nice of you to show up, my father said. I'm sorry you worried, I told him. A silence, the scents of lake water and compost and green shoots splitting open the dark earth, and then he said, Want to go fishing with me, Lucy? How about it? It's been a long time. His words were wistful, and I remembered getting up before dawn to meet him, struggling to carry the tackle box as we crossed the lawn to the boat. I wanted to go fishing, to accept my father's invitation, but I wanted more to go upstairs to think about Keegan Fall. So I turned away, and in a tone as sharp as broken shells, I said, Dad. Really. I'm hardly little anymore. Those were the last words I ever spoke to him. Hours later, waking to sunlight and urgent voices, I ran downstairs and across the dew-struck lawn to the shore, where they had pulled my father from the lake. … thoughts which have never left me: If I'd gone. If I'd been there. If only I'd said yes.

Such a horrible thing for a young woman to carry these ten years. She is educated, works as an hydrologist,


[hydrology is the branch of science concerned with the earth's water, especially its movement with relation to land]

has had several short-lived relationships, and has traveled as far away from home as possible. It never works though, does it? 'Wherever you go, there you are.' At this point in her life she is living in Japan with Yoshi, and unemployed when she hears that her mother has been in an accident, and though not badly injured, has hurt her wrist. Yoshi suggests she go home for a visit. As she wonders whether to go -

I found myself thinking about people who work too hard, too constantly to keep such feelings at bay. It is only when we stop that our true emotions have a chance to come to the forefront.

So, Lucy does go home with Yoshi planning to join her in a couple weeks. She goes back to this house and garden which was described here. She happens onto some old letters and newspaper clippings which set her off on a journey of discovery about her family, and herself along the way. She gets a chance to rethink events from the past with an older perspective. She finds deep and sometimes upsettling truths. Not until Lucy returned and went further back into a family history she didn't even knew existed, could she come to terms with her life before and after her father died. If you are like me and do not like to read about terrible family secrets which so often involve abuse and terror, I reassure you that these horrors are not in this book.

The Lake of Dreams read like a book from older days, like something by D.E. Stevenson, a favorite author of mine. Simply said, The Lake of Dreams is a very good story. There are some mysteries from the past to be solved. There is a relation who is completely new to Lucy. Kim Edwards is a master of description, whether an old deserted church or a vegetarian restaurant or this stained glass window:


The image of the woman was stylized. She was tall and thin, and she gazed down at her cupped hands. Her auburn hair, piled on top of her head, escaped in tendrils; her dress was deep blue, falling to her ankles, her arms and feet were a pearly opalescent white. She was looking down at three pale blue eggs in her palms and her eyes seemed almost closed.

She writes of Lucy's visit to an historical society:


The air smelled of dust and old paper. Rows and rows of books lined the shelves and I let my eyes linger on the sturdy spines, thinking how human books were, so full of ideas and images, worlds imagined, worlds perceived; full of fingerprints and sudden laughter and the sighs of readers, too. It was humbling to consider all these authors, struggling with this word or that phrase, recording their thoughts for people they'd never meet.

It was this very passage which Marcia posted on her Owl's Feathers blog which made me get the book and read it.


She had been reading a novel, and when I came in she put the paperback facedown on the arm of her chair; I glimpsed an ethereal baby dress against a background of black...

The novel is the author's first book, The Memory Keeper's Daughter, which I haven't read yet, but hope to. 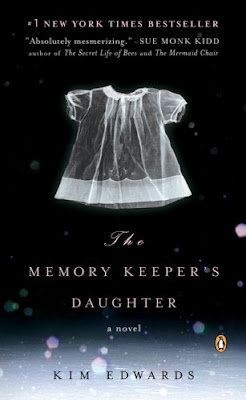 When I finished this book, I was in the living room, alone in the house save for Sadie and Raya with the west light coming in through the porch door, the evening sun spotlighting the leaves of the trees off the porch. The air was clear and cool enough to wear a sweatshirt with all the windows open. Life just seemed so perfect, so right at that time that I wanted to make note of it.

You may see a video interview with Kim Edwards here. It is about 11 minutes long, and really quite wonderful.
Posted by Nan