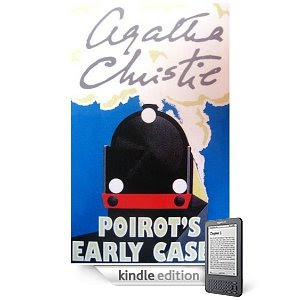 According to my often quoted, and much-referred to, copy of Agatha Christie - A Reader's Companion, in 1974:

In place of the usual novel, given her advancing years [she was 83 that year], Christie's publishers brought out a collection of eighteen short stories written in the inter-war years and earlier serialized in newspapers or magazines. Roughly contemporary with Poirot Investigates [which I wrote about here], they are in no respect inferior to that collection, published fifty years previously. Fourteen are narrated by Hastings, the remainder were written after his creator banished him to Argentina.

It gave me great joy to read the two short story collections back to back, which according to this is the suggested reading order. The only one I had read was Wasps' Nest. One of the stories, The Chocolate Box, was referred to in Peril at End House. Someone in that book says to Poirot:

'I've been hearing all about you and what a wonderful chap you are. Never had a failure, they say.'
'That is not true,' said Poirot. 'I had a bad failure in Belgium in 1893. You recollect, Hastings? I recounted it to you. The affair of the box of chocolates.'
'I remember,' I said.
And I smiled, for at the time that Poirot told me that tale, he had instructed me to say 'chocolate box' to him if ever I should fancy he was growing conceited! He was then bitterly offended when I used the magical words only a minute and a quarter later.

This story stayed in my head, and so I was very pleased to come upon it in this collection. The tale begins as Hastings and Poirot are sitting comfortably by the fire on a wild and windy night. They are feeling cozy and contented when Hastings asks:

'No, but seriously, have you ever failed?'
'Innumerable times, my friend. What would you? La bonne chance, it cannot always be on your side. I have been called in too late. Very often another, working towards the same goal, has arrived there first. Twice have I been stricken down with illness just as I was on the point of success. One must take the downs with the ups, my friend.'
'I didn't quite mean that,' I said. 'I meant, had you ever been completely down and out over a case through your own fault?'
'Ah, I comprehend! You ask me if I have ever made the complete prize ass of myself, as you say over here? Once, my friend -' A slow, reflective smile hovered over his face. 'Yes, once I made a fool of myself.'
He sat up suddenly in his chair.
'See here, my friend, you have, I know, kept a record of my little successes. You shall add one more story to the collection, the story of a failure!'

I quote this whole passage because it completely delights me. It shows the warmth Poirot feels toward Hastings: he calls him 'friend' four times in this little space. Often in the books, Poirot gently, and sometimes not-so-gently, makes fun of Hastings so I liked this affirmation of how much he cares about him. I also like seeing Poirot mildly humble as he is here. He really is a genius. He does solve many cases, and so has earned the right to gloat a bit, but it was nice to see him accepting the fact that he isn't perfect.

Another of the stories is The Plymouth Express which is really The Mystery of the Blue Train, told in shorter form with a few changes in names. I found this so odd and went looking for more information. I discovered that the 1928 book is based on this 1923 short story. But I couldn't find out why she wrote both a story and a full-length book on the same theme.

You may tire of my wholehearted praise over and over again, but each time I read a Christie book, I am in awe of her. I'm beginning to see her in the same light as my favorite writer of all time, P.G. Wodehouse. And that's the highest praise this reader may offer.

The Reader's Companion has a review from Publishers Weekly when Poirot's Early Cases first came out calling it:

'fine wine in a new bottle for aficionados of the mistress of mystery. It's exhilarating to be back in the company of the Belgian dandy, Poirot, as the little grey cells land him again and again one meaningful step ahead of crook, cop and reader. As always, the author is scrupulously fair with her audience - the clues are all there - but she invariably surprises us just the same.'

I'm hoping that Agatha Christie read these words and that they gave her much pleasure in her twilight years.

Thought you might enjoy this view of the 1974 cover 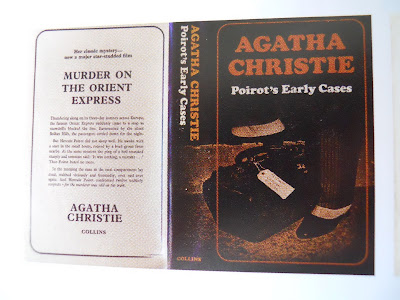 And this is what The Reader's Companion has to say about it: 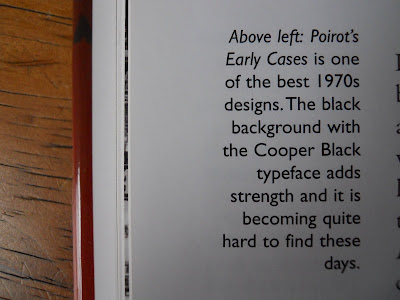