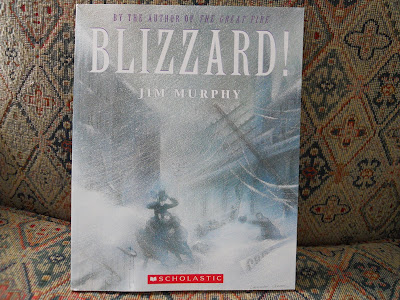 Sometimes a nonfiction children's book is exactly what I want to read to learn about an historical event or person. It isn't 400 pages of details I might not be interested in. It is written in clear, simple, understandable language. It usually offers true case histories. And Blizzard! does all of these things. This is a most satisfying and interesting book about the blizzard in the northeastern United States in March 1888. It is filled with all sorts of details that will draw in a young, as well as an older reader:

Many other things were being blown about as well. Like most cities back then, New York had no antilitter laws, so newspapers, household trash, bits and pieces of debris, broken glass, and ashes were routinely tossed into the gutter without thought. Add to this a daily deposit of two and one-half million pounds of manure and 60,000 gallons of urine from the city's 60,000 horses! All of this garbage hardened into chunks that were picked up by the wind and slapped into the traveler's faces.

Jim Murphy offers true stories, with real names which really helps bring those far-off days alive to the modern reader. When someone collapses, we think of him as a real person not a statistic. The author did an incredible amount of work as is presented in the endnotes. There is a lot of documentation on this particular storm and in fact there was even a group formed called The Blizzard Men and Blizzard Ladies of 1888. He is clear about the fact that there were other horrific storms both before and after this one, but that more has been written about this because it crippled cities like New York and Washington, D.C. President Grover Cleveland and his wife were stranded at their country home 'without any way to contact his cabinet or the Congress.'

Because of this storm, big changes were made all over the country. Before it happened cities were not responsible for clearing the snow on residential streets. There were no subways. Wires were a tangled mess above ground. 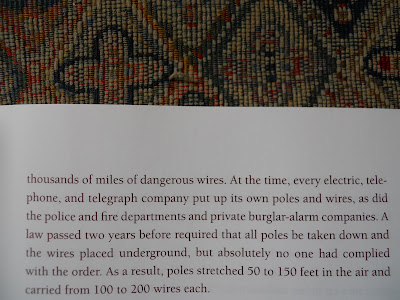 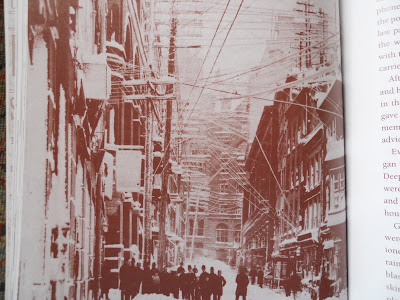 The book is full of photographs and drawings from the time and there are actual pages from newspapers. It tells us of the many aspects of the storm: transportation, food, clothing, and most importantly the people. Here is an overturned train, a common occurrence during the blizzard days. 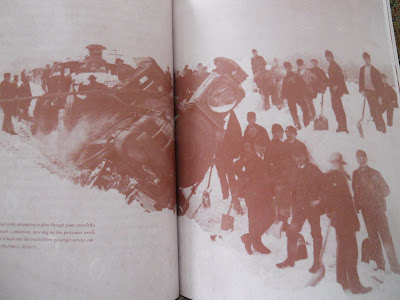 He doesn't focus on the cities alone. He tells about the problems in more rural areas as well. There's an account of children lost in the storm which reminded me of Erlendur's story in the Arnaldur Indridason books, though with a happier result. He also tells of the toll on the poor horses.When it finally ended on March 14, it headed across the Atlantic and brought snow to northern England and other parts of Europe, and became known as 'the American Storm.'
Posted by Nan