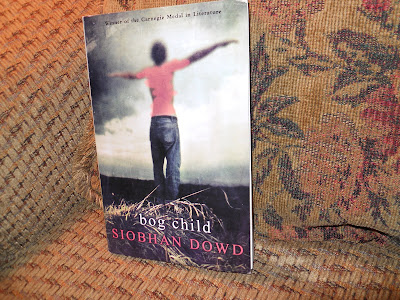 
I may be wrong but I have a sense there is a whole generation of Americans that has never heard about 'The Troubles' in Northern Ireland. I would guess that there are kids who think terrorism is a word that came into being on September 11. The flow of time is relentless and events overtake events. Names that were so familiar like Bernadette Devlin and Bobby Sands are likely unknown today.

Here is where a book such as Bog Child could be very helpful. Inside its pages, older teens could learn what life was like for young people growing up in that place in the early 1980s. It wasn't a happy, idyllic time. You never knew when a car bomb would go off. It was a time of war.

And yet, regular life went on. In Bog Child, Fergus and his uncle Tally are up early in the morning cutting turf (illegally) to sell (illegally) for heating fuel before the 'real' diggers come to work when Fergus finds a body in the peat bog. They must get the police before the company comes and destroys it with their big machines. Because they have crossed over the border into the Republic of Ireland, it is the 'Gardai' they contact, telling them they were birdwatching when they came upon the body. This isn't a new body, or even a body from a few years back. It is a well-preserved young girl from a very long time ago, AD eighty. Fergus begins dreaming about her and her life back then. The dreams are all done in italics and they are scattered throughout the book. These dreams eventually tell of how she died. An archeologist comes to investigate along with her daughter, and they stay at Fergus' house. There is an empty bedroom because the older son Joe is in prison for terrorist activities.

Fergus is studying for tests which will decide if he can leave this place and go to college. His brother Joe begins a hunger strike in jail. Fergus is known as a runner, and is approached to deliver and pick up 'packets' while on his early morning runs. He doesn't want to get involved but does so in the hope that these people will convince his brother to stop his fast. And then later when this doesn't happen, he is blackmailed into continuing. Fergus has gotten to know the border guard, a young man from Wales who is on the 'other' side of this political situation. If he doesn't keep doing the pick-ups and drop-offs, Owain will be killed.

Perhaps Irish or English teens reading the book will know the history and will understand what is going on, but for a reader who doesn't know, it may not be so clear. There are initials and words that are incomprehensible - RUC, Provo, Fenian, IRA, Prod. I felt like an outsider who didn't know the codes, and I imagine a younger person who wasn't familiar with the time or the place or The Troubles, would throw up his hands and just quit the book. And this made me sad. A book that could have explained and illuminated this Irish situation just didn't do so.

I wanted to know more. I wanted more details. I wanted to get to know Fergus and his family better. They didn't feel real to me, except in one part near the end of the book. I was especially disappointed because I loved the late Siobhan Dowd's The London Eye Mystery.

If anyone knows of fictional accounts of Northern Ireland during the long years of The Troubles, I would welcome recommendations. In fact, I'd also like to read some nonfiction about those times. There is an excellent film which gets to the heart of it all called Five Minutes of Heaven, starring Liam Neeson and James Nesbitt. This and some other films about The Troubles are listed here.

Addendum: I did a search for other reviews and you may enjoy these more favorable views of the book from:

and some who feel about the same way the way I do:
Becky's Book Reviews
Thoughts of Joy
Posted by Nan