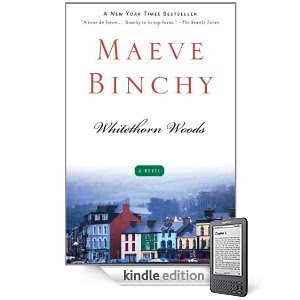 
In Whitethorn Woods is a well which has apparently been visited by St. Ann, the mother of the Virgin Mary. Father Flynn, the local priest doesn't believe it is holy.


From what he had read and studied, St. Ann and her husband, St. Joachim, were shadowy figures, quite possibly confused in stories with Hannah in the Old Testament, who was thought to be forever childless but eventually bore Samuel. Whatever St. Ann may have done in her lifetime two thousand years ago, she certainly had not visited Rossmore in Ireland, found a place in the woods and established a holy well that had never run dry.
That much was fairly definite.
But try telling that to some of the people of Rossmore and you were in trouble.

The people come with their supplications. The branches of nearby trees are covered with notes of request or thanksgiving.


"He's off the drink for three months, St. Ann, I thank you and beg you to continue to give him strength..."
"I'm afraid to go to the doctor but I am coughing up blood, please, St. Ann, ask Our Lord that I be all right. That it's only some kind of infection that will pass..."

The well in Whitethorn Woods is the center around which this novel revolves. We are introduced to the various souls who call upon St.Ann. There are rumors that a new bypass will be built which will relieve traffic in the town and the people are divided on the issue. Some think it 'would take the life out of the place' while others feel that it would 'return to Rossmore some of its old character.' But the main issue is that it would tear up the Woods and disturb the well.

At the beginning of Maeve Binchy's books, I find myself looking forward to meeting her wonderful characters. This isn't to say they are all splendid examples of humanity, but each one fascinates me. She gives so much detail about their lives, their relationships, their homes, and how they connect to one another that I begin to feel they are real, and what higher praise can be given to a novelist?

We meet a couple whose marriage fell apart after their baby was kidnapped many years ago. The husband has been cruel to his wife and is now in jail. There's a murderous daughter and her incredible mother. In a humorous chapter the reader is introduced to Hugo, a taxi driver who plays a part in bringing love into the life of Emer. And there is Neddy Nolan, one of the dearest characters I've met in literature. He is described as not the 'sharpest knife in the drawer' which may be true, but he is certainly the kindest person imaginable, and as it turns out, is much smarter than anyone had guessed. We learn a great deal about modern Ireland, and the change in the Catholic church there. Father Flynn has his finger on the pulse of the community as he goes about his daily ministrations, pondering his role in these times.

I simply couldn't be happier with all these Maeve Binchy books. I'm beginning to wonder if I'll read any other authors for the Ireland Reading Challenge!
Posted by Nan