The Tapestry of Love by Rosy Thornton 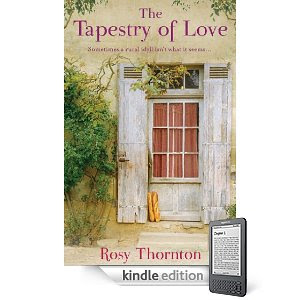 
After the intensity of Dreaming of the Bones, this book was just the ticket. I have read about it quite a few times on various blogs, the latest being Mystica's.

St. Valentine's Day is coming up soon, and it reminds me of how so often when we hear the word 'love' we think romantic love. Yet really, love is all kinds of love: between parents and their children, between siblings, between friends, even between an owner and his animals. There is love for our neighbors or those folks we see often in the Post Office or grocery store. And there can be a love of place, of landscape. They each become a part of our own life's tapestry. That's what A Tapestry of Love is all about. Our heroine moves from Buckinghamshire England to the Cévennes region of France and finds the richness that all the different kinds of love can bring to a life.

A day after I wrote the preceding in my drafts folder, I came upon Erin's Valentine blog entry, and she says much the same thing. Amazing.

I feared this was going to be the kind of book where an older divorced woman moves to a new place to begin a different life and finds romance. I've read a few such books and found them most unsatisfactory and unrealistic. This book did not disappoint me. First of all Catherine Parkstone has been divorced for a number of years. Her children are now grown and out on their own so she decides to try a new kind of life. But there isn't the feeling that she is depressed or desperate. Very early on she notes that she has 'no one to please but herself.'

Catherine moves to an area which her family used to visit when she was a child so it is not entirely new to her, but still it seems daunting to me to think of buying a house where I knew no one. In that sense, I thought her very brave. And she doesn't move in the spring of the year, but in September. Soon the 'rains' will begin which would discourage many people. But not Catherine. She welcomes the weather and the seasons as part of this 'tapestry' of life. When our locale is part of our very being, I think we more fully accept all its facets, including so-called bad weather.

This area she has chosen is not an easy landscape. It is in the Cévennes National Park. There are roads with hairpin turns which she must negotiate as part of her daily life. In time she learns them so well she can drive even in foggy weather.

Her hands on the wheel anticipated every corner, and knew just what angle to take on every bend. 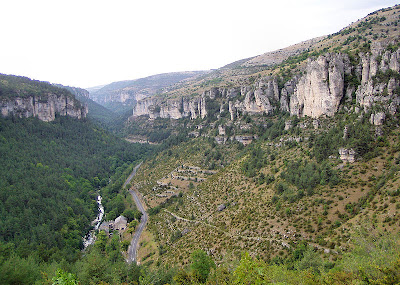 Her house, Les Fenils (which I've seen translated as 'the barns' and 'the haylofts'), was lived in by an older woman who has recently died. In the course of the book we meet a few independent country women who live alone after their husbands die. It feels like Catherine is following in their footsteps, continuing this tradition, though of course she is not a widow and she is still relatively young, being in her late forties. She copes with occasional power outages and other inconveniences with aplomb. She simply lives her life.

An early passage describes her new home and shows the incredible detail in this book:

An hour later, washed in cold water and dressed in jeans and jumper, Catherine was sitting in the sunshine on the stone front doorstep eating bread and strawberry jam. The door behind her was the more imposing of two doors that opened on to the terrace courtyard at the front of Les Fenils. They stood at right angles to each other, one leading into each arm of the long, low, L-shaped house. There was no back door, because the north wall of the house - the back of the longer of the two arms - was solid and windowless, built to fit snugly against the wall of grey-black cévenol granite which rose steeply above it, house and gorge chiselled from the same rock.

From where she sat on the step, Catherine saw the tops of the small orchard which sloped away below the house in front of her and to the right; built in terraced steps, it was shored up on drystone walls and held together by the roots of apple, greengage and Mirabelle, as well as the tenacious old turfs which Monsieur Bouschet had mown for her. Further up into the crease of the hill to her left, beyond the short south wing of the house, stood a cluster of sweet chestnut trees, traditional providers of flour for mountain bread, and at their feet a row of empty beehives. This was the limit of her land, and from her lowly vantage point she could see no further in any direction - except for straight ahead of her, south across the little valley to the ridge of wooded hillside opposite.

Halfway down to St. Julien was another clutch of ruins, what might once have been two or three farmhouses and a scatter of outbuildings - the best part of another hamlet. 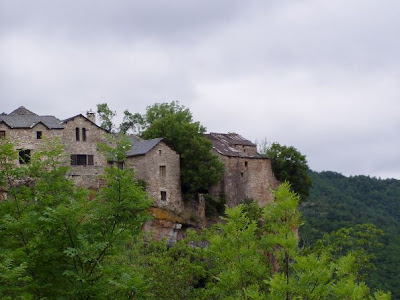 The book is full of such descriptions. Every place Catherine goes becomes familiar to the reader. Her walks in the woods, the village, the house she visits. I don't know when I've read a book in which I felt so at home because I could really 'see' where I was. Everyone in this tiny place is kind to her, from the postman to the man who mowed her fields, to the shopkeeper. We get to know them, as we also meet the other people in Catherine's life: her children, her sister, her mother who lives in a nursing home, and even her ex-husband. These people weave in and out of her life, just as she weaves her tapestries from which she hopes to make her living in this new place.

I could go on and on praising this truly wonderful book. It gave me one of the most enjoyable reading times I've ever had. I loved it.

Please do visit the author's website, and her page about this book.
There is an interview with Rosy Thornton at Carol's blog.
Posted by Nan