Mrs. Malory and the Only Good Lawyer 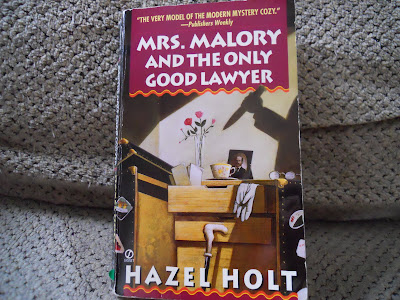 Do you know the Mary Engelbreit quote, 'Life is just so daily?' Well, that phrase kept popping up in my head as I read this Mrs. Malory book. It is so daily and that's why I love it. Sheila cooks and feeds her cat and walks with the dogs. She loves her son Michael to pieces, and is happy that he lives with her while doing law work in his late father's firm. She frets and she rejoices. There are people in her life who annoy her and people she treasures. She is truly an everywoman, and the reader feels that Sheila is a friend. A literary friend yes, but a person very like our own real friends if we are lucky.

When an unpleasant house guest is found murdered on the beach in her town, of course Sheila Malory gets involved. Graham Percy was a friend of Sheila's late husband, and her home is one of the stops on his tour of friends each year.

A more sensitive or perceptive person might perhaps have noted a certain lack of enthusiasm, a rather forced joviality on our part, but Graham, like all self-centered people, sees what he wants to see and, I'm sure, always describes us to other people as his oldest and dearest friends and looks forward to his visit in Taviscombe as one of the high spots of his year.

As the story progresses, we find out that everyone he visited thought him a disagreeable man. He was a 'hanger-on' who tried to push himself on others even as a young student. We wonder why they all put up with him year after year. This is one of those mysteries where the sins of the past cast long shadows.

The book is sprinkled with literary references from Shakespeare to Jane Austen. Mrs. Malory is a scholarly woman, yet utterly unpretentious.

... the kitchen, which was a large, airy room, with blue and white flowered curtains, a Welsh dresser laden with brightly colored crockery, an Aga, a heavy kitchen table covered with a deep blue chenille cloth, and several comfortable chairs. On the seat of one of the chairs, curled up on a patchwork cushion, was a large tabby cat. The whole thing looked exactly like the stage set of some 1930s comedy by Eden Phillpotts.

In addition to being a wonderfully descriptive passage, I so enjoyed the mention of a writer I hadn't heard of before. And as often happens in life and reading, I just finished an Agatha Christie book which was dedicated to Eden Phillpotts 'to whom I shall always be grateful for his friendship and the encouragement he gave me so many years ago.' I've gone looking for his work but sadly not much is available. I'll search some more for I think he is someone I would enjoy reading. Though I haven't mentioned it for ages, this is an example of what I call, 'the Guernsey effect' from The Guernsey Literary and Potato Peel Society

And fans of Jane Austen will love this:

"Oh, do look, David! There's a McDonald's here now. All done up in the local stone, but definitely a hamburger joint, here in Bath. What would Jane Austen have said? Or her characters? Think how sarcastic Mr. Knightley would have been, or Mr. Darcy!"
"Oh, but think," David replied, "how Lydia and Kitty Bennet would have loved it! Hanging out at McDonald's would have been so much more fun than trailing into Merryton to catch a glimpse of the militia!"

I will offer a warning to not look at the cover too closely as you read because sadly, and incomprehensibly, it could give away 'whodunnit!'

This may be my favorite Mrs. Malory book so far, and after I finished, I thought to myself that I could probably be very happy reading only these four mystery authors: Hazel Holt for cozy mysteries, Agatha Christie for old mysteries, and Deborah Crombie and Arnaldur Indridason for modern mysteries.
Posted by Nan