The Mystery of the Blue Train by Agatha Christie 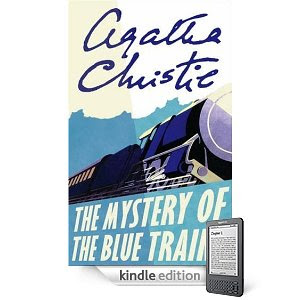 I think most of us know that there is too often a hint, either broad or subtle, of anti-Semitism in Agatha Christie's work. It makes me cringe every time I read such passages. And she isn't the only author. In those years, there were prejudices which were expressed in life and in literature. I like to think things are better now, but I'm not so sure. I recently read a piece in the New Yorker about the Shinnecock tribe in the Southampton area of Long Island, and the writer noted that a trustee of the group used 'racial profiling' in his descriptions of people.

As much as I hate reading any kind of prejudicial remarks in fiction, I still do not believe in changing the words of old books. That's like changing history to suit ourselves. Literature is sacred to me, no matter what it says. I think it is better for people to read something distasteful and discuss it with others, or breathe a sigh that such words, such sentiments are not as acceptable now.

The Blue Train goes from London to Nice, France and by traveling on it one avoids 'the tiresome Customs business at Calais.' On this train we have, among others, Ruth Kettering, the murder victim to be, who has an expensive ruby with her; her maid, Mason; her husband Derek who is soon to become her ex-husband; the newish assistant to Mrs. Kettering's father; and Miss Katherine Grey from Miss Marple's village of St. Mary Mead who has just inherited a great deal of money from a woman she took care of for a long time. And of course, Hercule Poirot the great detective. His dinner companion happens to be Miss Grey, a particularly engaging woman in her early thirties, and he notices she is reading a 'roman policier,' a detective novel. She doesn't think such stories could ever happen but Poirot says, 'I who speak to you - they have happened to me.'

'Some day, who knows, you might be in the thick of things,' he went on. 'It is all chance.'
'I don't think it is likely,' said Katherine. 'Nothing of that kind ever happens to me.'
'Would you like it to?'
The question startled her, and she drew in her breath sharply.
'It is my fancy, perhaps,' said the little man, as he dexterously polished one of his forks, 'but I think that you have a yearning in you for interesting happenings. Eh bien, Mademoiselle, all through my life I have observed one thing - "All one wants one gets!" Who knows?'

And naturally, excitement does come into Katherine's life in the form of this murder on the train. She becomes a kind of assistant to Poirot in the case.

'Well, Mademoiselle, how goes it?'
She looked at his twinkling eyes, and was confirmed in her first impression that there was something very attractive about M. Hercule Poirot.

This is the first Poirot in my recollection in which a woman has viewed him as attractive. She doesn't fall in love with him, and they are merely amiable friends in the story, but I wonder if it occurs ever again, and if not, why not? I think it would have been a nice touch to have a little love in Poirot's life.

The Mystery of the Blue Train was an interesting, involved case with a number of disagreeable characters. As a mother I had a hard time with the murder in this one; the death of a man's daughter. Agatha doesn't dwell on his sadness, but the reader is all too aware of how he feels. I read that this is the first time St. Mary Mead was described by Christie.

My Agatha Christie: A Reader's Companion by Vanessa Wagstaff & Stephen Poole, which I've mentioned before, offers this great picture. 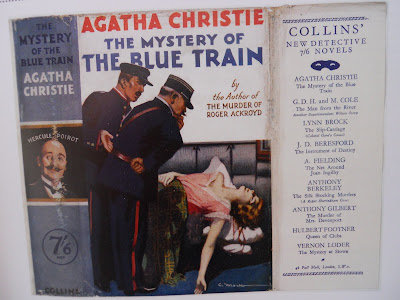 If you click on it, you may see more clearly the names of a number of other mystery writers from this time. I wonder how many of them are known today. I myself have heard of only Anthony Berkeley and have his first book waiting on my shelf. From The Reader's Companion I learned that this mystery was written while 'Christie was recovering from the breakdown of her marriage.'

She was later to say that she hated it and thought it the worst she had written. Her readers did not agree and while it is far from her best book, it is not a bad read. It is based on her short story 'The Plymouth Express,' later published in the UK in Poirot's Early Cases (1974) and in the USA as one of eight stories in The Under Dog (1951).

I agree with the authors of the Companion book. It isn't a fantastic story, but still I am very glad I read it. I love the character of Katherine and it was entertaining to see Poirot working with her. The investigating officer is so pleased that Hercule is on board. He tells Ruth's father:

'... you have doubtless heard of him. Although he has retired from his profession for some years now, his name is still a household word as one of the greatest living detectives.'

If you substitute 'fictional' for 'living' I would certainly agree. Even a not-so-great book is still worth reading for the joy of learning more and more about Hercule Poirot.
Posted by Nan