A Graceful Death by Ann Summerville 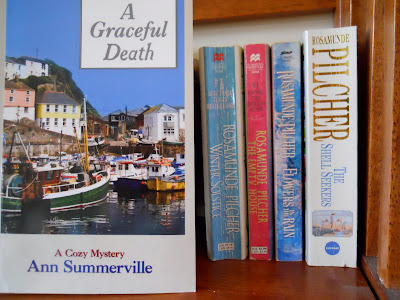 
You may wonder why the photograph of the book is beside my beloved Rosamunde Pilcher books. It is because A Graceful Death reminded of Pilcher's work, and not only because of its setting. There is a kindly spirit throughout the book, even though there are some unpleasant people.

Giovanna's Aunt Grace has died at her home in Cornwall, seemingly from a heart attack. Giovanna is devastated because Grace was like a mother and a best friend to her. She spent summers there as a child, and occasional weekends as she grew older. Her fiancé, Alan doesn't want Giovanna to 'run off to Cornwall' but if she must go then he wants her to sell her aunt's cottage and come back to London quickly so they can get married before Alan's birthday in two weeks. The reader wonders why he is so pushy, and so thoughtless about Giovanna's grief. She manages to withstand his pleas, loads her dog Daisy into the car, and heads out to Lowenna to sort through her aunt's things, and put her legal affairs in order.

Giovanna's sadness is eased somewhat by the beauty of the place and the kindness of old friends, yet there are troubling aspects to her visit. She frequently sees a man hovering near the cottage. The police are calling her aunt's death a suicide. If her long-lost cousin is not found, her aunt's home may be sold, and Giovanna will have no legacy. She also must face the reality of her relationship with Alan, especially when she meets a childhood friend she hasn't seen in years, and he offers her a compassion and kindness her fiancé rarely shows.

The mystery is a good one, and I found myself hoping at the end that Ann Summerville would continue Giovanna's story, including another mystery or not. I so enjoyed the characters and would like to spend more time with them. Both the beauty of the landscape and the interiors of the house are wonderfully described, again with a feeling of Rosamunde Pilcher.

Giovanna nodded, and leaving the smells of yeast and freshly baked bread behind, crossed the courtyard and ascended the steep stairway. Breathless, she reached the top and stopped for a moment. Before her were green fields, flower strewn hedgerows and a stream flowing at the bottom of the hill. A hawk drifted in the thermals and disappeared behind the tree line. She looked back at the house and courtyard. Mrs. Penrose, framed by the French doors, waved and disappeared into the darkness of the kitchen.

This is a lovely book, and one of the best cozies I've ever read. The author has a website and a blog where you may read more about her and her work.
Posted by Nan