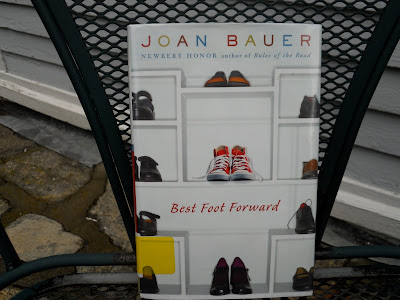 
This book begins immediately after Rules of the Road ends, which means I can't really write much about it without spoiling the ending of the first book. Jenna is back working at the shoe store. The book mostly takes place there, with only occasional musings on her family situation, particularly her father.

Mrs. Gladstone is still having trouble with her son. She has a picture of him on her desk.

She looked sadly at the picture of Elden as a laughing child. He'd been a cute little boy. She reached for that photograph. Everything within me told me to shut up, but the truth was stuck in my throat and if I didn't say it, I'd probably choke.
"That's not him anymore, Mrs. Gladstone."
I thought she was going to start yelling.
"It's not him. You've got to have another picture in your mind of him because if you don't, your son is going to keep hurting you."
She put the picture down fast and stared out the window.
I wasn't sure I should say this next part. "Mrs. Gladstone, sometimes the worst thing you can do for someone you love is look the other way when you know they're doing something really wrong." I told her about my dad driving drunk and how I had to stop him.
She looked at me almost tenderly.
"That's the hard part of finding out the truth, ma'am."
"And how is your relationship with your father now, if I may ask."
I let out a big breath. "We haven't got one right now."
"I'm sorry, dear. You deserve better."
"So do you."
She looked at Elden's little boy face. "He was such a thoughful child. I don't understand what happened."

If I were a teacher I would offer this book right alongside Rick Bragg's The Most They Ever Had, for both of these books are about business, workers, the economy, and our country.

Mrs. Gladstone has found out that the company shoes are being made in Thailand rather than in Maine as she had believed.

The children at the factory were found to be eleven to fourteen years of age. They are forced to work twelve-to-fourteen hour shifts. They are exposed to gross health and safety infractions. They are fined if they do not meet their production quotas of the day, and the quotas are set unfairly high.

They are in the same situation as children were in our country in earlier times. Mrs. Gladstone works hard to try and help the young workers.

The book also shows us that some kids, like Jenna, do find their life path when they are young.

Nobody sets out to sell shoes, really. People aspire to bigger and greater things. But there's something about feet that certain people were born to understand.
Some people say there should be more to life - more money, more prestige. I don't think much about that. I just try to focus in full on the person's two feet in front of me.

This is an excellent book, just as Rules of the Road is. Joan Bauer touches on many important facets of life, as well as telling an engrossing story.

A blurb on the back from School Library Journal says:
"When it comes to creating strong, independent and funny teenage characters, Bauer is in a class by herself."

This is so true. Jenna's life isn't perfect. It isn't easy having an alcoholic father and a mother who has to work really hard to support her two daughters. It isn't easy to have to balance school and work when you are Jenna's age. But she doesn't complain. She gets help when she needs it. She is a good person. Period.
Posted by Nan