The Draining Lake by Arnaldur Indridason 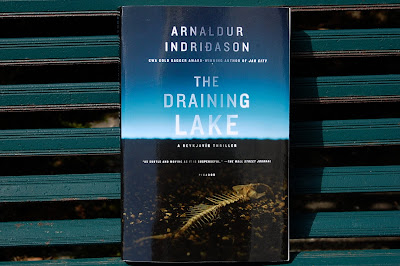 In each of Arnaldur Indridason's books I am completely transported to another land, a place utterly unfamiliar to me. As interested as I am in the plot, I am even more interested in the country and its people. In each book, I learn more and more about Iceland - its geography, weather, politics, and people. 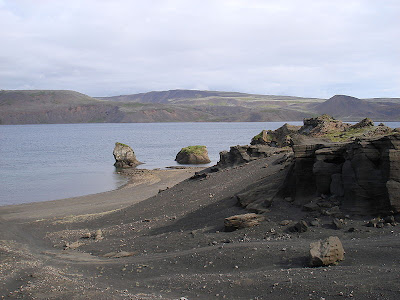 This is Lake Kleifarvatn, the 'draining lake' in the book title. It is pronounced: Kley-varrr-vahtn. It is a real place and it is indeed draining. I read the following online:

At nine square kilometres, Lake Kleifarvatn is the largest lake on the Reykjanes peninsula and the third largest in southern Iceland, although its size tends to vary a bit, especially in recent years. After an earthquake in 2000 the lake started draining rapidly. Like water draining from a sink, its water level began to decrease. This obscure occurrence caught the attention of local as well as international geologists who are still speculating how this was even possible.

A woman who is recording the water level makes a discovery in this lake that never would have surfaced had this draining not occurred. Ribs and a skull are 'standing up' out of the lake bed. Right off the reader realizes that secrets will be revealed that may have been hidden for many years.

The book goes back and forth from the 1950s to the present, and from Iceland to East Germany. Young Icelandic communists were recruited, invited to attend college in Leipzig, a cultural city which bore little resemblance to its pre-war self. The descriptions make the reader feel that it a little hell on earth:

And the psychological and emotional components of the city are even worse than the physical. Toward the end of the book there are chilling statistics:

East Germany had come the closest of any country to almost total surveillance of its citizens. The security police had headquarters in 41 buildings, the use of 1,181 houses for its agents, 305 summer holiday houses, 98 sports halls, 18,000 flats for spy meetings and 97,000 employees, of whom 2,171 worked on reading mail, 1,486 on bugging telephones and 8,426 on listening to telephone calls and radio broadcasts. The Stasi had more than 100,000 active but unofficial collaborators; 1,000,000 people provided the police with occasional information; reports had been compiled on 6,000,000 persons and one department of the Stasi had the sole function of watching over other security police members.

The idealistic Icelandic students walk into the horror, having no idea of what was really going on. They were sure these people were going to make a better world, and any inconveniences or unpleasant actions performed by the government were temporary and for the greater good.

The sections of the book set in East Germany reminded me of the fantastic film I wrote about here a few years ago called The Lives of Others.

Inspector Erlendur and his colleagues, Sigurdur Óli and Elinborg go to work trying to find out who the skeleton is. The body is a male who was connected to an old radio transmitter, and has been in the water for 40-50 years. They look into missing persons from those years. If you've read the earlier books, or perhaps read about them here, you may recall that missing persons are a particular interest, one might even say obsession, of Erlendur's. Sigurdur Óli notes:

There is a flashback to when Erlendur began his career. An older policeman asks him if he has 'a particular interest in crime,' and Erlendur responds that he is 'interested in missing persons.'

I think they may have more to do with crimes than people think. I've got nothing to back me up. It's just a hunch.

This 'hunch' is what guides Erlendur through all such cases. He is haunted by the people left behind when someone goes missing; images such as a woman waiting outside a shop for her boyfriend to come. He goes to work trying to give some solace, some closure to them.

Throughout the investigation, we learn more and more about this country which is so very foreign to most of us.

'Was he depressive?'
'No more than most Icelanders.'

Many Icelanders suffer serious depression, although most keep it well concealed.

In Iceland there's rarely a real motive behind a murder. It's an accident or a snap decision, not premeditated and in most cases committed for no obvious reason.

'We arrested the same man for burglary five times in one weekend. Every time he confesses and is released because the case is solved. He breaks in somewhere again, gets arrested, is released, burgles somewhere else. It's brainless. Why don't they set up a system here for sending idiots like that straight to prison? They clock up twenty or so crimes before they're given the minimum custodial sentence, then the minute they're out on probation you're arresting the same ones [word inserted in place of a most 'colorful' word in the book] again. What's the point of such madness?"

And Erlendur adds: 'You won't find a more hopeless set-up than the Icelandic judicial system.'

This is not a book I raced through. I didn't even read many pages each time I sat down. Some days I didn't read at all. I finished the one before this, Voices on June 25, and it took me three weeks to read The Draining Lake. I wanted to take time to think about what I read. It is a deep book, and the characters, especially Erlendur but also his children and co-workers get deeper with each book. I've simply never read anything like this series in my reading life.

The first book I read, Jar City, had a section at the beginning about Icelandic names. I think it would be helpful if it were repeated in all the Erlendur mysteries but they haven't been.

Icelanders always address each other using first names, since most people have a patronymic [based on the name of one's father, grandfather or an even earlier male ancestor] rather than a "proper surname" ending in -son for a son and -dóttir for a daughter. People are listed by first names even in the telephone directory. Strange as it may sound to the English ear, first names are therefore used throughout the police hierarchy and when police and criminals address one another. Erlendur's full name is Erlendur Sveinsson, and his daughter is Eva Lind Erlendsdóttir. Matronymics [a name derived from the name of a mother or female ancestor] are rare, although Audur is specifically said to be Kolbrúnardóttir, "Kolbrún's daughter." Some families do have traditional surnames, however, either derived directly from or else modelled on Danish, as a result of the colonial rule which lasted until early in the twentieth century. Briem is one of these traditional surnames, and as such it does not reveal the gender of the bearer - in the case of Marion Briem the ambiguous first name compounds this secondary mystery.

In The Draining Lake, Erlendur's family life isn't as prominent as in the other books, and his colleagues are a bit more in the forefront. One of them is hoping for children, and another has published a cookbook to great acclaim. We also spend some time with Erlendur's earlier, older co-worker who is retired, alone, ill, and bored. He still has insights to offer to the younger man. You could probably read the books out of order, but it has been fun for me to see the characters develop from book to book. Of course as I have noted, the first two haven't been translated into English. I would think all translations would begin with the first book in a series, but the Arnaldur Indridason books aren't the only ones which have been translated mid-series. Even so, I don't feel like I've missed much. I can't praise these books highly enough. If you'd like to read the other book reports, you may type Arnaldur into the search bar. Great, great series!
Posted by Nan