A River in the Sky by Elizabeth Peters 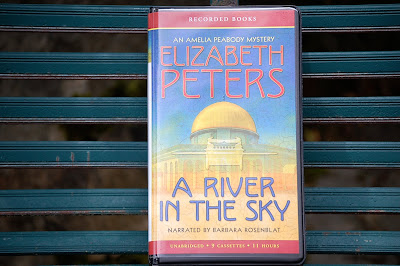 37. A River in the Sky - 19th in the Amelia Peabody series
by Elizabeth Peters
mystery, 2010
unabridged audio read by Barbara Rosenblat
finished, 7/12/10


I loved this latest book about the Emerson family. I am just so glad it exists because I felt quite sure when the previous one, Tomb of the Golden Bird - 2006, ended that would be the end of the series. Amelia and Emerson literally walk off into the sunset, and I sighed with the thought that this was a truly perfect end to just about my favorite mystery series ever. When I heard there was a new one, I just couldn't imagine how they would go on from there, but Elizabeth Peters did a great thing, in my opinion, and went back in time. She tells us a story that takes place before the First World War. They aren't in Egypt or England this time. Ramses is off on an archeology dig in Samaria, a city in Palestine. His parents are asked to go to the same area to help a fellow in his attempt to find the lost Ark of the Covenant, but they don't trust him and say no. Then the British government asks them to change their minds and go spy on him because they fear he is going to cause trouble in the region. They decide to go, and arrange to meet Ramses in Jerusalem.

As with all these books, the details don't matter all that much to me. There are always villains, great descriptions of locales, and familiar characters. The series began with Amelia Peabody meeting Radcliffe Emerson. They marry. They have a son. And their lives go on year after year, adventure after adventure. The same characters appear in the books. One of the most beloved dies, but in the books after his death, he comes to Amelia in dreams, always in the same place in Egypt. It is a wonderful device to keep his wisdom in the stories, and it is not overused, nor does it seem silly or affected. He always helps her think things through. We all feel as Amelia does; so glad to see him again, yet we ache when he goes off.

Do I write as if I know these people? As if they are real? Well, I would guess that most of us who read a long series begin to feel this way about the characters. I'm sure that Archie Goodwin and Nero Wolfe are somewhere in New York City still. And Mary Russell and Sherlock Holmes are alive, as is Maisie Dobbs. This is what is just so lovely about being a reader. Reading connects us to our childhoods in a way, when we did believe in fictional characters.

This belief is deepened when we listen to a series. Barbara Rosenblat is Amelia Peabody. She brings this woman alive to the listener. I've never read the books in print but if I did, I would hear that perfect, perfect voice.

A River in the Sky doesn't have a lot of the tension and stress the other books have had, which is just fine with me. There is a kidnapping and some evil people but there are many kindly ones as well. I didn't mind not worrying about 'the children.' Sometimes their adventures are nerve-wracking, especially if the reader is a parent with children much the same age. When they got older, Peters began to include 'manuscripts' - stories told from the points of view of Ramses, David, and Nefret. We saw how so often Amelia and Emerson didn't have a clue of the dangers they were facing, and the parents were probably better off not knowing, just as we are when our teens or twenty-somethings are living their lives away from home.

Here's a real treat I found on the author's homepage:


And here is Elizabeth Peters in her garden: