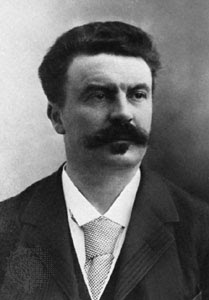 What to do to celebrate Hallowe'en. My little ones have grown, so no trick or treating. I'm not a party-goer. So I thought that the perfect "bookish" activity for me today was reading Guy de Maupassant's The Horla, the October short story choice on a blog I've recently joined, A Curious Singularity. And I thought this would be just the ticket; a scary little psychological tale to chill my sensibilities. I made the conscious choice to read it in the daylight hours just in case. :<) The story is written in diary form, with dated entries. It begins with soothing, beautiful descriptions of the natural world. It feels utterly peaceful and such an appealing place to have spent one's childhood, and moved into adulthood. But the next entry shows us a whole different state of mind. Anxious, not sleeping, fearful. I wondered what brought it on, as does the writer. Is this a mental condition? Is he lacking in nourishment, exercise, sleep? The latter is a definite problem, for when he is able to sleep, he has nightmares. He takes a trip to Mount Saint-Michel, and speaks with a monk who tells him of otherworldly happenings, and says:

Do we see the hundred-thousandth part of what exists? Look here; there is the wind which is the strongest force in nature. It knocks down men, and blows down buildings, uproots trees, raises the sea into mountains of water, destroys cliffs and casts great ships on to the breaker; it kills, it whistles, it sighs, it roars. But have you ever seen it, and can you see it? Yet it exists for all that.

As I read on, it seemed to me that these nighttime scares happened only at his home. If that was so, I wondered why he didn't just leave permanently. Of course, later on, he seems unable to do so.

I think this could have made a good scary movie, but reading it for me was boring. His ramblings became tiresome. I wanted him to go see people, to move, to change his life. He was completely self-absorbed. Did he have no friends? What about that cousin or other family? Could he not have talked to someone?

I liked the writing, the images, the words chosen, but I just got so annoyed with the man. Maybe he was going mad, and I should have sympathy for him, but I found it hard to do so. I wondered too much about his background, his family, even the house itself, and that took away, perhaps, any concerns about what was happening to him.
Posted by Nan