Book Report/The Castle in the Attic, 1985 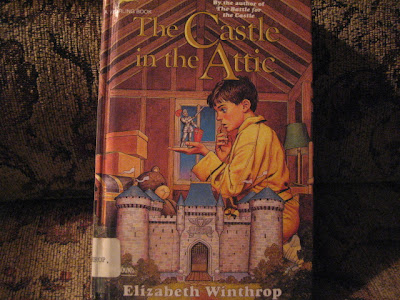 I'm not a very fast reader, and so sometimes it is a delight for me to read a juvenile or young adult book because I finish it quickly. I have the double pleasure of an enjoyable book and a quick read.

Recently there was an interview on Vermont Public Television with Elizabeth Winthrop. Her latest book, Counting on Grace has been Vermont's 2007 Community Reads choice. During the interview, she began talking about The Castle in the Attic, a book I remember being on our bookshelves when my children were young, and I wanted to read it.

William is a boy of ten, who is small for his age and does gymnastics. His parents are gone quite a bit and he is taken care of by Mrs. Phillips, a woman who has been with the family all his life. Now she plans to move to England to be with her brother. William is bereft. As a going away present, she gives him a toy castle which has been in her family for generations. It is beautifully made with all the features of a real castle. There is only one figure, though, the Silver Knight. Mrs. Phillips says there is a legend surrounding him:

He was thrown out of his kingdom long ago by an enemy of some sort, and it's said that one day he'll come back to life and return to reclaim his land. But the whole time I played with the castle, he was as stiff and cold as lead.

She goes on to tell him that family tradition says that "you're supposed to meet the Silver Knight on your own." And William does. When he picks him up, the little figure comes alive. This sets in motion a fantastical adventure, which seemed utterly real to me as I got caught up in the story. As all good children's books do, this one buoys up the young character. He faces problems and adversities, and must learn how to deal with them, using what is inside him.

The words my father said over me when I became a knight: rules of conduct we must respect, be we knight, squire, or page. Be compassionate to the needy. Neither squander wealth nor hoard it. Never lose your sense of shame. If questions are asked of you, answer them frankly but do not ask too many yourself. Be manly and of good cheer. Never kill a foe who is begging for mercy. Be ever loyal in love.

Pretty good words for any young or old reader to take to heart. This was a wonderful book and now I'm off to begin the sequel, The Battle for the Castle.
Posted by Nan