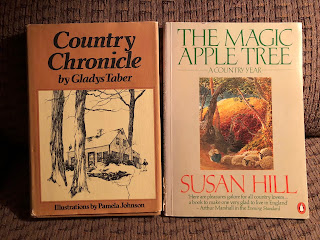 The last words in Susan Hill's summer chapter are


Everybody's home [from summer vacations] and looking sunburnt, notices begin to appear on the village board, about the beginning of this and the first meeting of that. On Tuesday morning, the school bus rounds the corner of the lane on the stroke of half past eight by the St Nicholas clock.

The summer is over.

I think most of us have mixed feelings about the end of summer. We are sad to see the (supposedly) more relaxing days pass by or to lose the hot weather. Yet we are a little excited about something new - buckling down to chores or going back to a job or school after vacation. There is an invigorating energy in the air, at least in climates such as mine.

In this final chapter of The Magic Apple Tree, Susan writes about those early days of autumn when it still feels summery.


At noon, it is very hot indeed, we are still wearing cotton clothes, and the children have gone back to school in summer dresses.

I well remember those days of walking home from school, simply boiling in my new fall clothes that included wool skirts and sweaters! But that time never lasted too long. As Susan says,


But day by day there are slight changes, subtle alterations in shape, in the mood of the season ... There is a smell in the air, the smell of autumn, a yeasty, damp, fruity smell, carrying a hint of smoke and a hint, too, of decay. It fills me with nostalgia, but I do not know for what. It is a smell I love, for this is and has always been my favourite season. They said that as I grew older I should recoil from it, the winding down of another year, the descent toward winter, the end of summer pleasures, that I would begin to shift my affections towards spring, when all is looking forward, all is blossoming and greening and sprouting up. But I do not do so. Spring so often promises what in the end it never pays, spring can cheat and lie and disappoint. You can sit at the window and wait for spring many a weary day.

But I have never been let down by autumn, to me it is always beautiful, always rich, it always gives in heaping measure, and sometimes it can stretch on into November, fading, but so gently, so slowly, like a very old person whose dying is protracted but peacefully, in calmness.

And I love the wild days of autumn, the west winds that rock the apple tree and bring down the leaves and fruit and nuts in showers, and the rain after the days of summer dryness. I love the mists and the first frosts that make the ground crisp and whiten the foliage of the winter vegetables.

I know that exact smell. I smell it occasionally here at Windy Poplars Farm, but I remember it most strongly on a certain stretch of my growing-up-street where I walked every day.

And she could have been writing down my exact feelings about loving autumn more than spring. I thought it was just me - living where I do, but she can also be disappointed by spring. Spring here can be cold and rainy. The grasses are full of ticks. But I have now found an antidote for any unpleasant weather and bugs in the spring. We planted daffodils last fall, and they were a constant delight to me for over a month. And this fall we planted alliums, and fritillarias, and an early flowering zone 3 clematis. So, even more beauty if the sky and the air are not what we all think of as springlike! And now that we've got those window air conditioners, I now love summer. It is quite a delicious feeling for me to suddenly love spring and summer, though still not as much as I do autumn and winter!

Then Susan Hill goes on to say something that I think might be a new thought to us, but is absolutely true when you think about it.


In early October, the woods begin to come alive again, and that surprises many people, who think of them in autumn as places of decay and dying, falling leaves and animals hiding away for their long winter hibernation. But it is summer that there is dead time, in summer the air hangs heavy and close and still, nothing flowers, nothing sings, nothing stirs, and no light penetrates.

But now, there is a stirring, a sense of excitement.

... The trees have begun to to turn colour but they are all at different stages. In summer in this wood every tree looks much like every other, though of course if you are close up, you can distinguish them by the shape of the leaves, and in the open, where they stand in ones and twos, by the shape of the whole body of the tree. Now though, in decay, the trees have become distinct, separate again, they take back their individual character, for no two species are the same in shading and depth of colour. I stand still and see sulphur-yellow and bright, bright gold, copper and tawny owl's feather brown, sienna and umber and every kind of nut, and the whole pattern breaks like a child's kaleidoscope as a sudden wind blows over the wood, becomes mottled, darker, and then lighter, as the leaves show their backs.

Throughout this book, I have been impressed with the author as gardener, cook, and now in this last chapter a preserver of foods. She has a delightful record of her "preserving week". Plums, apples, brambles (I think what we call blackberries), elderberries. Jellies and jams and chutneys.

She writes about the Women's Institute, and I am filled with such longing to be part of such a thing. After reading this last chapter, I watched my boxed set of DVDs of Jam and Jerusalem, for maybe the fourth time. There was a very telling part when the regional leader tells their quite small WI that it is so much more than what they do. She says that the wonderful thing about it is the way it has brought together women who would not necessarily be friends otherwise. And Susan Hill writes much the same about this. She has a long section on the "autumn produce Bring and Buy sale."


I look around the room at everyone. Friends, Neighbors, Grey-haired, lined and wrinkled faces, middle-aged faces, beginning to sag, the faces of young women. Most are married, some not. There are working wives of farmers, there are gardeners. None of us has manicured and lily-white hands. Otherwise, we are all very different. From different generations and backgrounds - different social classes, too, let it be said, for, having been said, it can be dismissed, it simply doesn't matter. There are women who use their brains in their daily jobs, work in the university city whose spires you see as you drop down the last hill of the village beyond Barley, there are the wives of dons and doctors and clergymen, women who have young children, women who have great-grandchildren, women whose ancestors have been buried in Barley churchyard for generations back, and women, like me, who have scarcely lived here any time at all, but who feel at home, because we have at once been made welcome.

Isn't this what each of us rather longs for? Perhaps especially those of us whose children are grown. We used to be more a part of things, and now it takes effort to find that "part" again. I am lucky because my children live near, and I have grandchildren, so I automatically am involved in their schools and their lives. I feel very, very thankful.

I have so loved this book. It has been a "magic" book for me. I was happy to find that Susan Hill also wrote two shorter books on the same sorts of subjects, and of course, I bought them. 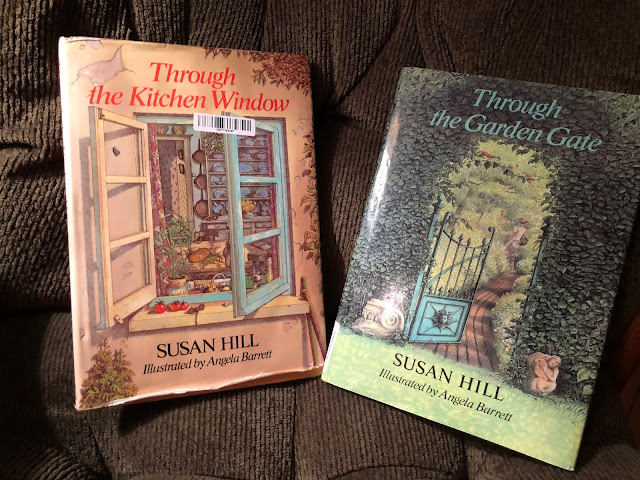 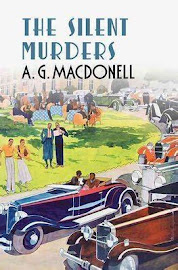 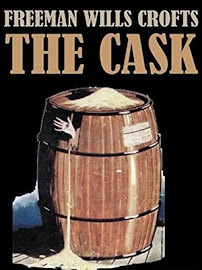