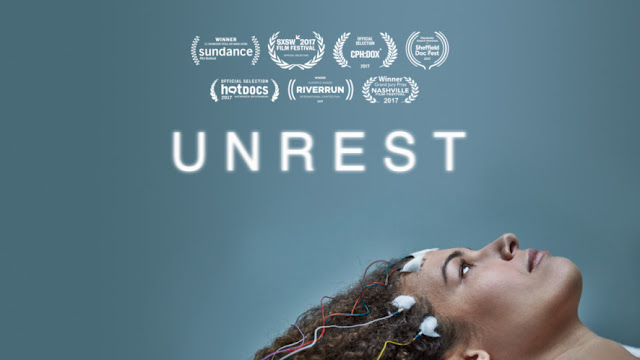 I know a young woman who has had the illness described in the film Unrest since she was ten or eleven years old, and I know a teenager who has had it for a year now, but is just letting the news out. I also have a long-time internet friend who has it, and whose daughter has it. Jennifer Brea, who has it, and who made this film, says there are a million cases in the United States, and seventeen million worldwide. That is more that there are cases in the world of multiple sclerosis. Yet unless you know someone with it, you have very likely never heard of it.

The horrors of this disease are expressed in a few letters. ME/CFS is the sort of umbrella name. Myalgic encephalomyelitis/Chronic Fatigue Syndrome. The latter name is the most familiar. As the movie shows, there are jokes galore. It was not taken seriously for years.

But there are many other illnesses that people with ME/CFS may also have. You should see the hashtags that my 29 year old friend attaches to her Instagram posts. Here are but a few: Ehlers Danlos Syndrome, Mast Cell Activation Disorder, Dysautonomia, Postural Orthostatic Tachycardia, each one sounding worse than the other. And they are awful.

The people who have this, mostly women (85%) often refer to themselves as "Spoonies". The dictionary says "a disability metaphor - how much energy you have left to complete tasks before becoming exhausted".

People can be sensitive to sound, smell, air temperature. Sometimes they are unable to speak. They have "brain fog." Some, like my friend, get their nourishment through a port.

The film is available on Amazon Prime and YouTube. You may also buy the DVD. If you have never heard of any of this, the film will tell you what it is all about. If you have a friend with it, the film will help you understand the day-to-day hell which is their lives. The film educates and angers and makes one cry. We see the pain of those who have it, and the pain of those who love them.  I can't recommend it strongly enough. This is a very important subject.
Posted by Nan