How I Spent My 12th Blog Anniversary/Thanksgiving

November 22, 2006 was the first day of Letters from a Hill Farm. I had been getting advice from my friend Les and her husband Rod about how to start a blog, she having started hers some months earlier. My internet connection was slow and I got frustrated thinking it would never work. I remember saying I could just read my Gladys Taber without writing about her! But finally, it was all sorted out, and here I still am, a dozen years later. A dozen years back from that first day was 1994. That puts some perspective on ol' father time, doesn't it!!

We expected to be home just having a regular day, as we often do on Thanksgiving, but a day or two before, Estée, our daughter-in-law told us a story. She said they had been talking to the boys about being thankful, and explained they were going to her parents' house for Thanksgiving and that they were all thankful for them. Campbell Walker said, "are Pop and Nana going to be there, because I am thankful for them." Well, that's all it took, of course! Actually, we had been invited, a sort of open invitation every year, but we hadn't been before.

It was a lovely, lovely day.They are renovating an old house.They have two dogs, Hamish the Bernese Mountain dog, and Angus the Golden Retriever. And there is little Indy Thomas! 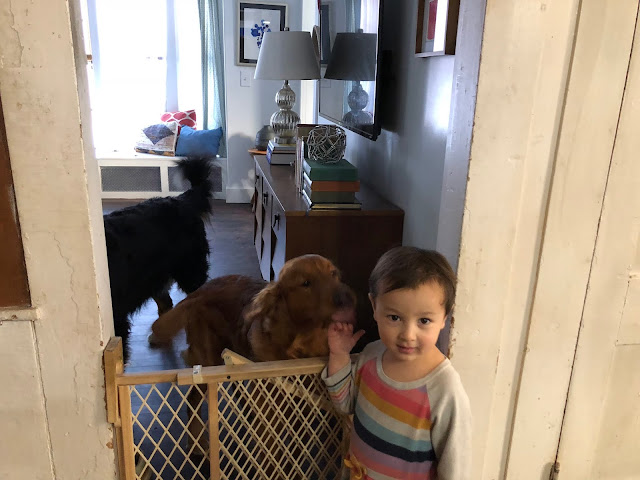 There was great food, and tons to eat for the vegetarians! My pictures from the day are mostly in-motion shots, and quite blurry, like the above. There was lots of good conversation and after dinner lots of music and dancing. Here is a little bit of Campbell Walker. I love his expressions!

When we went around and said what we were thankful for, I said, "family."
Posted by Nan