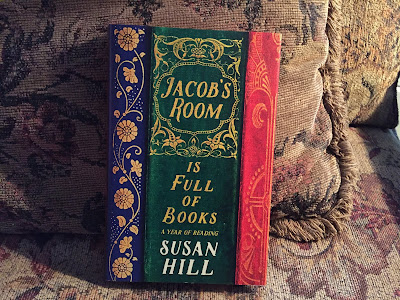 As I near the end of this most wonderful book, I find myself hoping so much that Susan Hill will write another and another and another like this and Howards End is on the Landing. They are as food and drink to me. My mind and heart are expanded with every chapter. I am in the presence of a real scholar, though she says of herself, "I am not scholarly material."

I feel like October is a pensive month, especially the second half. The days get shorter, daytime itself gets darker, and often the rain or snow prevents outside activities. This makes me happy, as I've noted probably too many times before in the almost twelve years of Letters from a Hill Farm. I am an introvert (not shy), I like sitting and reading, I like time to be quiet and think. So October and November suit me perfectly. The October chapter is 31 pages of many deep thoughts, and I was in reading heaven. 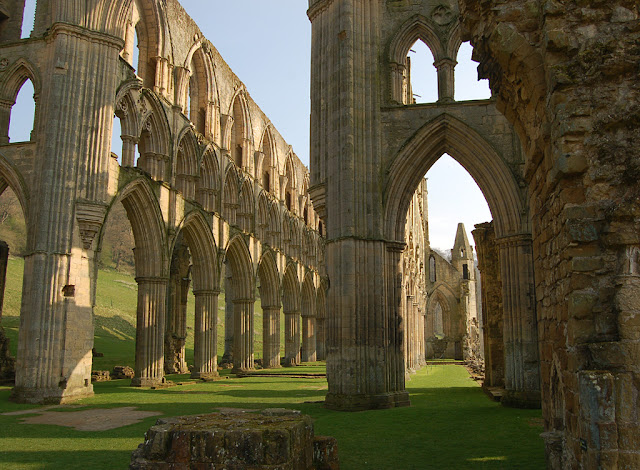 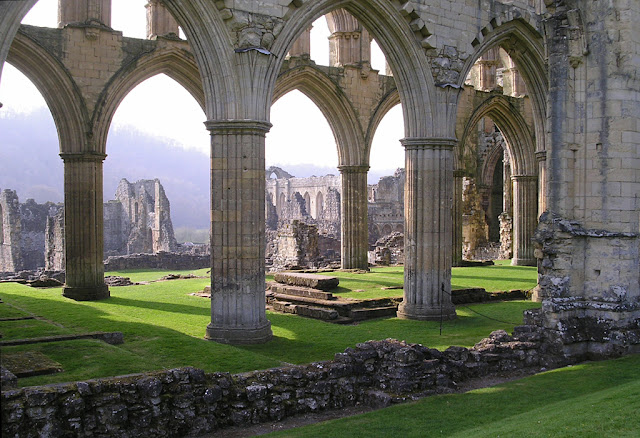 If you arrive late and out of season, when the sun is going down, you really can get some sense of what life was like in this bowl of the Yorkshire Dales, where sheep bleat through the soft air and the light gleams through the majestic ruins, archways, slit windows, whole 'rooms' and magnificent spaces.


I am glad there is so much left of Rievaulx. When you stand alone there, even though the sky and not a roof is over your head, you can hear the whispers of monastic chant and the faint ghostly swish of the heavy robes, see the shadowy procession of hooded figures on their way to and from the chapel. And there is nothing remotely spooky about it.

The author goes on to talk about Aelred of Rievaulx.


I came to love Aelred because I came to know him. So much of that time is very distant and different, yet there is enough left of Aelred's writings, we know so much of his life and personality, that he can come closer to us than many who have lived later. ... Aelred was a great and good man.

And how did she come to learn about him? Well,


A decade ago I did what I had longed to do since 1963, when I received my first degree, and started to read for another, an MA this time in theology. Having been brought up in a Catholic convent, and spent many years as an adult Anglican,  ... I felt - and indeed, still feel - that I knew too little about the basis of and background to it all and about various aspects of Christian history. But I wasn't about to return as a full-time student to what is now called the campus, I studied by distance learning. If you have already taken a first degree, and especially if you are older and doing this voluntarily, and so anxious to learn and put the hours in, this is an ideal way. The internet has made it all possible. My essays were e-mailed in and marked and returned by the same route, but nice, fat, printed books of the modules came by post.

I loved the course from Day 1. I immersed myself in it as in a warm bath.

So, you see what I mean about her being a scholar!

Suddenly, she stops and writes this beautiful sentence.


A long skein of pink-footed geese has just gone over towards the marshes.

She offers a wonderful granddaughter story.


Lila was only two and visiting once when the owl man appeared to do his ringing. He brought a white cotton drawstring bag, and came right to the house, by the back door, so that we could all watch. My grand-daughter stared in amazement, her eyes really like saucers, as he drew out the young owl from the bag, inspected it, let it open its wings to their full extent - which even on a baby owl is pretty wide - and then ringed it without any fuss, folded its wings gently together and slipped it back in the cotton bag. Two and a half years later and she still remembers.

Susan goes on to write about her granddaughter and books.


It is a joy that she is now having read to her some of the stories we read to her mother, and often from the very same copies. The most recent favorite is Tales of Polly and the Hungry Wolf by Catherine Storr, which was loved by us all thirty-five years ago. Lila's father does a very impressive wolf's voice. And so the same stories are re-born over and again. The Elephant and the Bad Baby, Stanley & Rhoda, Each Peach Pear Plum, Burglar Bill, Mog the Forgetful Cat, The Tiger Who Came to Tea and so on, to My Naughty Little Sister, that everlasting favourite, and now, to my delight, The Magic Faraway Tree.

As you might guess, I loved this so much! We have passed along quite a few of Margaret and Michael's books to them so they can read them to their little ones. We've read a bit to Hazel over the years, though not too much because often with children, much of the reading happens at bedtime. We're looking forward to Hazel, Campbell, and Indy staying overnight when they get older. In fact, right now we are working on the HCI room! Tom has finished the painting. We'll go about it gradually, buying beds, etc.

I think I've mentioned that when we brought the kids to England, Ireland, and Wales in 1992, we bought tapes over there to listen to in the car. The very most favorite was The Magic Faraway Tree. My kids still do perfect imitations of the narrator saying, "Saucepan". We also own two of the stories Susan Hill mentioned - Mog the Forgetful Cat and The Tiger Who Came to Tea. 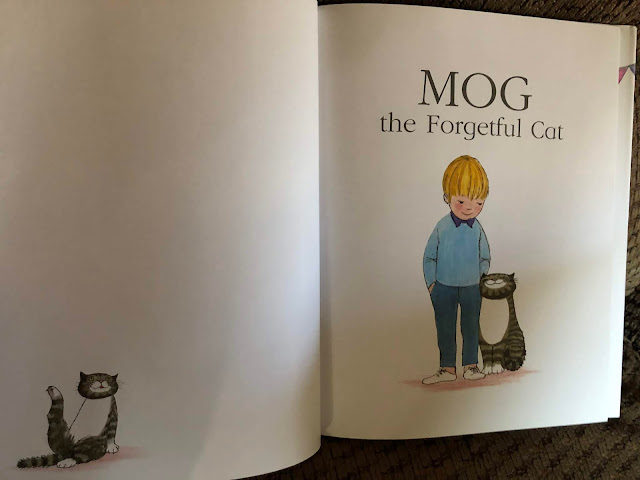 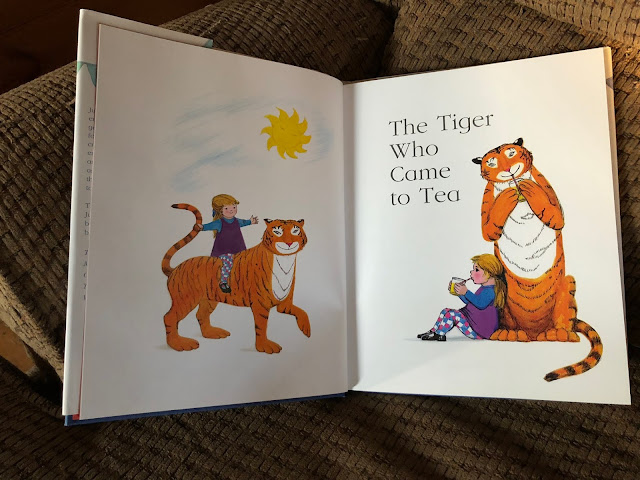 They are in this collection 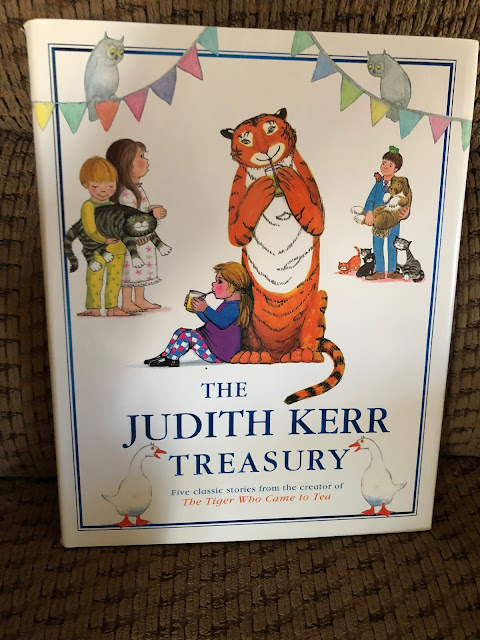 which was given to me by my long-time blogging friend, Val, last year. Of all the books we have, this is the one Hazel asks for the most.

This month's The Oldie magazine has an article on Judith Kerr. 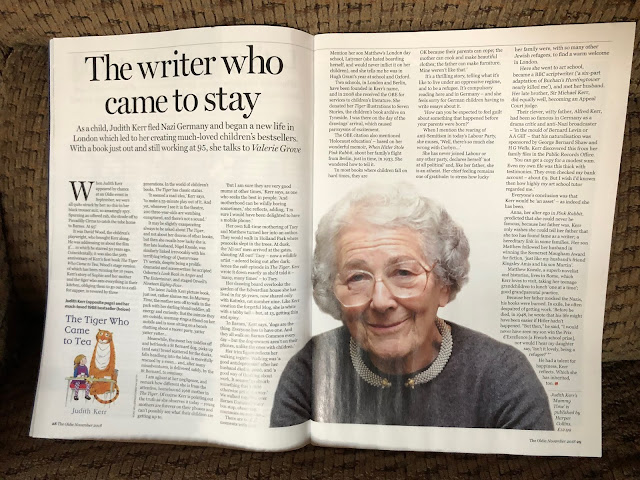 She is 95, and still takes walks and has written a new book! In this country I think she is best known for When Hitler Stole Pink Rabbit. It was in Tom's classroom library when he taught 7th and 8th grades.

There is much, much more in the October chapter about authors and prizes and writing and even eels (yuck, me says).
Posted by Nan