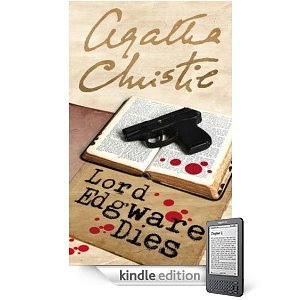 This book was published in America under the title Thirteen At Dinner, which comes from the superstition that it is unlucky to have thirteen diners at a table. It is also said that in the case of thirteen, the one who gets up first will have bad luck.

The murder victim in this case, Lord Edgware was a more creepily modern character than I usually encounter in Christie's work. We learn of his predilections from the books in his library:

There were the memoirs of Casanova, also a volume on the Comte de Sade, another on mediaeval tortures.

And the man tells Poirot that he enjoys 'the macabre.'

It is understandable that such a man's wife would like to get out of this marriage, and so it happens that Jane Wilkinson, a famous actress approaches Hercule Poirot at a dinner party (not the thirteen setting one):

I've not read of many characters like Jane. She is utterly self-absorbed, thinking only of others as how they relate to her. A man says of her:

'Amoral is the word, I believe. Just sees one thing only in life - what Jane wants. I believe she'd kill somebody quite cheerfully - and feel injured if they caught her and wanted to hang her for it. The trouble is that she would be caught. She hasn't any brains. Her idea of a murder would be to drive up in a taxi, sail in under her own name and shoot.'

What an extraordinary thing to say about someone!

Lord Edgware is 'stabbed in the back of the neck just at the roots of the hair' and is killed instantly. And who is the most likely suspect, his wife, of course! Hastings and Japp make some interesting observations about Poirot in this story. Japp says:

He's always been what I call peculiar. Got his own particular angle of looking at things... He's a kind of genius, I admit that. But they always say that geniuses are very near the border line and liable to slip over any minute.

I am afraid that I have got into the habit of averting my attention whenever Poirot mentions his little grey cells. I have heard it all so often before.

This is one of my favorite Poirot mysteries so far. The twists and turns are amazingly constructed, and I, as usual, had not a clue as to whodunnit. All I know is that Hercule Poirot will solve the mystery.

My Reader's Companion which I've mentioned before notes that Lord Edgware Dies was written in Iraq, while Agatha Christie was accompanying her husband on an archeological expedition.

I haven't seen the PBS production, or the 1985 film of the book. In the latter, David Suchet who the world knows as Hercule Poirot played the part of Inspector Japp!
Posted by Nan