An Unsuitable Attachment by Barbara Pym 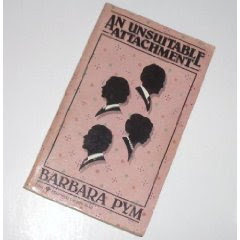 (A photo from the internet of my edition of the book because my son is borrowing my camera.)

When I open the pages of a Barbara Pym book, I enter one of my favorite literary worlds. I let out a quiet sigh, and feel I am home. Her writing calms and relaxes me, and I finish the books refreshed.

In An Unsuitable Attachment we meet a new man in the parish, Rupert Stonebird, and pretty much the whole book is absorbed with which of two women this anthropologist will marry. Will it be the vicar's wife's sister, Penelope, or will it be Ianthe, the daughter of a late canon, who left her enough money to set up her own house, and is Rupert's neighbor. And are either of them interested in marrying him? We meet various other characters who interact and interfere in one another's lives. Pym's people are not always stellar individuals. They whine, they gossip, they annoy one another and us. But they are so real, so human that we like them anyway. There is Ianthe's boss who 'covets' her furniture. There is the local vet, and his sister who is passionate about cats.

All of these people, and a few others embark on a trip to Rome, where things happen, but nothing startling. They happen in the same quiet way they happen back home in early-1960s London.

Perhaps this all sounds pretty dull. There isn't any violence, there are no dark family secrets. It certainly isn't 'current.' There is simply a gentle story told as only Barbara Pym could, with wit and irony, and with affection for her characters. Not dull at all for this reader, but endlessly interesting and restful.

Another book report on Barbara Pym at Letters from a Hill Farm here.
Posted by Nan