The Murder on the Links by Agatha Christie 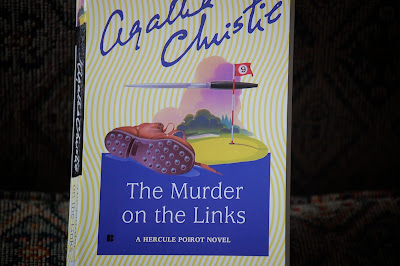 A young man we often call our 'second son' recently stopped by, and spoke of 'sitting down with a Jameson's (Irish Whisky) and an Agatha.' Don't you love it?! This fellow is twenty-nine. He played the part of the butler in his high school production of And Then There Were None, and I think his love of Agatha Christie began then. He spread his arms out about three feet to show us the room his collection takes up on the bookshelves. It just thrills me to see this generation loving her. May her work be read forever.

In P.D. James' Talking About Detective Fiction, she notes a set of rules Ronald Knox noted in the preface to Best Detective Stories 1928-29. One is quite pertinent to this book:

The stupid friend of the detective, the Watson, should be slightly, but no more than slightly, less intelligent than the average reader, and his thoughts should not be concealed.

This is a perfect description of Arthur Hastings. As I began, I found myself irritated with Hastings and his complaints about Hercule Poirot. But the more I thought about it, the more I thought of Hastings as everyman or at least every reader. He jumps to conclusions, accepts the obvious, and says all the things we might be thinking but would never dare admit to Poirot. Still, I was annoyed that he is so often critical of Poirot, thinking his detections useless and stupid, and in this book is wowed by the hot shot French detective. I'm thinking there have been other unwritten adventures between The Mysterious Affair at Styles and this book, and it seems to me that Hastings should trust by now that Hercule is a genius and whatever steps he takes to solve a case will be necessary. In An Autobiography, speaking of The Murder on the Links, Christie writes,

I thought I might as well marry off Hastings. Truth to tell, I think I was getting a little tired of him. I might be stuck with Poirot, but no need to be stuck with Hastings.

And from Agatha Christie, A Reader's Companion by Wagstaff & Poole:

Her irritation with a character of her own making is perhaps understandable but just as Conan Doyle had stuck with Watson, Christie was to find Poirot and Hastings more difficult to separate than she had anticipated.

In this story, Poirot receives a desperate letter from a man saying he fears for his life. Poirot and Hastings arrive at his house to find he has been murdered. Poirot decides to stay and find the killer. As you may imagine, there are several possible suspects. There are suspicious goings on, and people who are not as they seem. Another death occurs, and we wonder if the same killer murdered both victims. There was so much activity in this book that it felt like a bit of a roller coaster ride. Was it the wife? Was it the mistress, or was there even a mistress? Who is the girl in the train? Where was the son? About midway through the book, Hastings says of Poirot that he is 'the hero of the hour.' Well, truly he is the hero of all hours. What a fantastic character. It has occurred to me that he is a bit of a spiritual ancestor of Mr. Monk. He is very neat and clean and orderly. Hercule has to make things even, and in this book, and another I can recall, it is this obsession which helps him solve the cases.

I so enjoyed being within the pages of this excellent mystery. I have the television version at the top of my Netflix queue, and perhaps will come back here with an addendum about it.
Posted by Nan