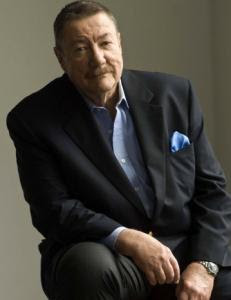 Robert B. Parker, whose spare, eloquent sentences turned the tough private investigator Spenser into one of Boston’s most recognizable fictional characters, suffered a heart attack at his desk in his Cambridge home Monday and died. He was 77.

Muscular and gruff like his creator, Spenser shared other traits with Mr. Parker. Behind the pugnacious exterior, both men liked to chase fine food with a cold beer. Both had a sharp wit and lived by a code of honor.

Over the course of three dozen Spenser novels, Mr. Parker introduced millions of readers to Boston, which was as much a character as his burly protagonist. To a predictable genre, he added a complex detective with a sensitive side. The wry dialogue between Spenser and longtime girlfriend Susan Silverman, who was schooled in the art of psychology, gave a modern twist to the repartee between the Nick and Nora characters created generations earlier by noted crime novelist Dashiell Hammett.

Joseph Finder, a Boston-based author of best-selling spy thrillers, said Mr. Parker “took the American hard-boiled private-eye novel that had been languishing for years, since James M. Cain and Raymond Chandler, and revitalized it. He took a lot of the standard tropes - the tough guy, the lone wolf, the man of honor on the mean streets - and updated them so that his Spenser character became sort of an avatar of himself. He was actually a guy who cooked, who was incredibly devoted to one woman, the way Bob Parker was to Joan, his wife.’’

Publishing 65 books in 37 years, Mr. Parker was as prolific as he was well-read. He featured Spenser - “spelled with an ‘s,’ just like the English poet,’’ he said - in 37 novels. He also wrote 28 other books, including a series each for Jesse Stone, the police chief of fictional Paradise, Mass., and Sunny Randall, a female private investigator in Boston.

His latest book, “Split Image,’’ extending the Jesse Stone series, is due out next month, said his agent, Helen Brann of New York City.

Mr. Parker’s marquee character was turned into the TV series “Spenser for Hire,’’ starring Robert Urich. “Jesse Stone’’ became a TV movie vehicle for Tom Selleck, and “Appaloosa,’’ his 2005 Western, was made into a 2008 film directed by and starring Ed Harris, who filled a shelf with Mr. Parker’s books.

“Robert wrote about this friendship between these two guys that tickled me,’’ Harris said of “Appaloosa.’’ “It just felt right. It felt good.’’

Mr. Parker, he added, “was a national treasure. I loved him and I’ll miss him.’’

Brann, who represented Mr. Parker for 42 years, said he had a heart attack while his wife was away from the house. “She saw him early in the morning, went out for her exercise, came back an hour later, and he was gone,’’ Brann said. “He was at his desk, as he so often was.’’

Pounding out up to five pages a day, Mr. Parker kept a pace few could match. Pressed for his secret, he made it sound simple.

Perhaps, but readers around the world raced to devour novel after novel. Brann estimated that Mr. Parker sold more than 6 million volumes worldwide. His work was translated into 24 languages.

He was teaching English at Northeastern University when he began writing the novels featuring Spenser, whose first name is never revealed. Mr. Parker didn’t care for academia and made no secret of his animosity in his first book’s first sentence: “The office of the university president looked like the front parlor of a successful Victorian whorehouse.’’

In 1975, Globe reviewer Walter V. Robinson welcomed “God Save the Child,’’ Mr. Parker’s second effort: “Spenser is back, and none too soon to give the connoisseur of that rare combination of good detective fiction and good literature a chance to indulge himself.’’

Mr. Parker grew up in Springfield, where he and Joan Hall first met at a birthday party when they were 3. They met again years later at Colby College in Maine. He pursued her. She resisted, then relented. They married in 1956.

After serving in the Army, Mr. Parker worked in a variety of jobs before going to graduate school at Boston University, where he received a doctorate in English literature.

In the early 1980s, the couple separated, then got back together in an arrangement they publicly acknowledged was unusual, but worked for them. They bought a sprawling house in Cambridge and each lived in a private area.

Mr. Parker dedicated his books to his wife, and told the Globe in 1992 that “she has been the central factor in my life since I was a child. You wouldn’t understand me unless you understand me and her.’’

In addition to his wife, Mr. Parker leaves two sons, David of New York City and Daniel of Santa Monica, Calif. The family is planning a memorial service.

Despite the wealth and fame that came with TV, movies, and worldwide sales, Mr. Parker “was so dependable, such a regular guy,’’ said Kate Mattes, who ran Kate’s Mystery Books in Cambridge for 26 years. “He never put on airs or anything, and he certainly had the right to.’’

Mr. Parker, who sometimes likened himself to a carpenter who built books, helped others learn his trade.

“The debt’s huge and I was always upfront about that,’’ Lehane said. “My first book is so much Robert Parker in the first chapter that I’m surprised he didn’t sue me.’’