The Case of the Cryptic Crinoline by Nancy Springer 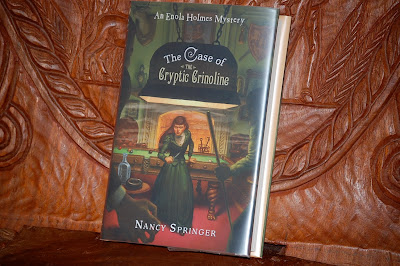 In The Case of the Cryptic Crinoline, Enola Holmes, young sister of Sherlock and Mycroft, meets the elderly Florence Nightingale. I hate to admit it, but I knew next to nothing about her until this book. We learn about her nursing life during the Crimean War, and that the conditions were horrific and those in charge were corrupt. This corruption is at the center of the book. One evening Enola's landlady, the kindly, deaf Mrs. Tupper, shows Enola a threatening letter she has received. She then proceeds to tell the young girl of her life during the war. The young Enola is amazed to hear her story.

I simply could not imagine ... my dear old landlady, she who now spent her days stewing oxtails and tatting pillow-slips, had once traveled to a barbaric land, lost her husband...

Soon, Mrs. Tupper is kidnapped, and it is up to Enola to find her.

In addition to learning about Florence Nightingale, I also learned about the dangers of boarding school caused by women's fashions in Victorian times:

The sufferings of an upper-class girl in a typical boarding school are only slightly less severe than those of an imprisoned criminal upon a treadmill. I speak of painful physical rigours that result invariably in deformity and sometimes in death.

Why do you think fashionable women constantly faint? And die of the slightest ailment, much less childbirth? Or occasionally fade away and succumb even before reaching childbearing age? It is because they are compressed at the waist in a practice no more civilised than the binding of a Chinese woman's feet.

The book tells the reader of the treatment of women in libraries. Enola puts on clothing which will let her 'pass as a particular variety of upper-class female, the kind who espouses causes and studies (or attempts to study, when not being harrassed by proprietary males) at the British Museum.' And later she speaks of the British Museum as a 'den of nasty old men.'

After her landlady is kidnapped, Enola goes out in the street and talks to eyewitnesses, each of whom tells a different story.

a shiny black brougham driven by a pursy, florid man, and the horse had been a bay

a phaeton with ... a nondescript narrow sort of driver and a black horse

a barouche ... and the horse was brown

This book is a perfect combination of historical information, a great young heroine and role model, terrific detail which brings the period and place alive to the reader, often wry humor, and a mystery involving morse code. I've loved each and every book in the series, and hope it goes on and on.

There is lots more Nancy Springer on Letters from a Hill Farm: