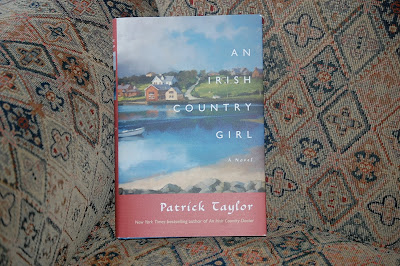 
This is one of the books you could win if you enter the drawing! You have today and tomorrow left to sign up here.

Second sight is a form of extra-sensory perception whereby a person perceives information, in the form of vision, about future events before they happen. Foresight expresses the meaning of second sight, which perhaps was originally so called because normal vision was regarded as coming first, while supernormal vision is a secondary thing, confined to certain individuals.

I think my mother had it to some degree. Just before my uncle died she heard three knocks and saw his face at the window. Then the phone rang telling of his death. That's the only instance I remember her telling me, though she did use a Ouija board to find out exactly where my father was during the Second World War.

We learn in this book that it can be hereditary, and I am thankful I don't have it. I do have those odd little moments which probably all of us have, like the other day when my daughter asked how is so-and-so doing just as I was about to tell her that person was coming for supper. Or another day when I read the title of someone's blog which happened to be a song title, and the next moment that song came on the Sirius radio station.

The reader first meets Maureen O'Hanlon 'Kinky' Kincaid in An Irish Country Doctor. She keeps house for the two doctors, Fingal Flahertie O'Reilly and Barry Laverty in the little Northern Ireland village of Ballybucklebo. We learned two things about Mrs. Kincaid in the first three books: she was married and her husband died young, and she has the gift of second sight. An Irish Country Girl is her story. When she has her first experience, her mother tells her:

It does run in families. I got the sight passed on from your Granny Fogarty... I was about your age when it started. The first time something happened I was fourteen, helping with the harvest. I was come over queerly. The world around me slowed down.

Reading this book felt a little bit like sitting at a beloved grandmother's knee as she recounts the story of her youth. And indeed, for a good part of this tale, Kinky is telling it to a group of young carolers on Christmas Day in 1964. The book begins just as the third one, An Irish Country Christmas ends.

And tell us she does, over almost three hundred pages. I was enthralled. When I wasn't reading, I was thinking about the story. It is told in such a down-to-earth manner that I felt sure it was true. The children certainly never doubted. They would pipe up occasionally with their own knowledge of the supernatural. The faeries in this book are not the sweet little ones we see in illustrations. These faeries have power and they can get very angry if someone crosses them, as Connor MacTaggart does. I've never understood people who do not listen to warnings: 'Don't get on that plane.' 'Don't go on that trip.' Of course the trouble in real life is that unless the 'warner' was overheard, when the 'warnee' dies no one knows he was warned. But in a story, we can see the dire consequences of not listening to one who has the second sight. Connor wants to cut down a blackthorn tree to help heat his cottage. When Kinky tells the children:

Hazel Arbuthnot pursed her lips, sucked in a breath, and shook her head. "Blackthorn? That's what Jesus' crown of thorns was made of, so it was.

"That's not the half of it," Kinky said. "You should have heard what Ma told Connor. She got very serious. 'Don't you dare touch that tree, Connor MacTaggart. Leave it alone entirely. Entirely, do you hear me now?'

"He laughed. 'Because the faeries, the Doov Shee, live under blackthorns?'

I really don't know when I have so enjoyed a book. Kinky (well, really Patrick Taylor!) is the best storyteller. The suspense was amazing. The details, the foreshadowings kept me almost holding my breath. As Kinky tells this tale, we also learn about her life as a young girl in County Cork in the 1920s. The book is history and folklore and human interest all wrapped into one. There is a glossary at the back, and there are recipes from Mrs. Kincaid herself.

In an author's note at the beginning of the book, Patrick Taylor tells us:
... some explanation is also needed for the readers who have come to know Doctors O'Reilly and Laverty, the village, and its inhabitants, because this book is different. But let me first thank you for your loyalty to Ballybucklebo. And please don't worry. Now that An Irish Country Girl is finished, I have begun work on the next Irish Country tale, which is set in familiar territory and peopled by the usual suspects.I cannot wait.
Posted by Nan