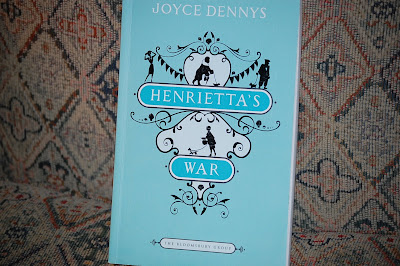 There's a kind of women's humor that seems to me to be particularly British. I first discovered it when I read Diary of a Provincial Lady by E. M. Delafield. Then I saw it again in two more modern authors: Helen Fielding in Bridget Jones's Diary; and in Sophie Kinsella's Shopaholic series. I can't believe I lived so many of my years not even knowing it existed. It makes you wonder about fate and life and how much is out there we might like that we have never even come across.

Now I add Joyce Dennys to that list. I just loved her 'voice' - that wry, quiet humor. This epistolary novel is a collection of letters written by Henrietta to Robert her 'Childhood's Friend.' She shares tales of home life during the Second World War, in mostly light and cheery tones. She says,

if I write of everyday things, it is only because I know that they are what you would rather hear about.

I'm sure many women on the home front wrote just such letters to friends, boyfriends, and husbands during this, and every, war. Surrounded by horror, who would not want to read a story like this:

Our biggest excitement this week, however, was provided by the Simpkinses. On Wednesday night Colonel Simpkins woke up and heard a commotion going on in his chicken-run. Convinced it was nothing less than a descending parachutist, he rushed out in his pyjamas and found an enormous badger which had got into the hen-house through the nesting-box and was busy trying to dig its way out through the wooden floor.

There have been a lot of hen casualties here lately, and Colonel Simpkins says he was almost as excited as he would have been if he had found Hitler in the hen-house.

On a tour of a neighboring garden:

Charles and I wandered round in a depressed way, wondering how we could ever have dared to call the jungle which surrounds our house a garden.

And another letter begins,

My Dear Robert,
I have got a croaking sort of cold and am having a day in bed.
This, as you know, is a tremendous treat.

Though she writes of domestic life, that life has changed much because of the war, and Henrietta doesn't falter when it comes to mentioning rationing, evacuees, sirens, and blackouts. Yet, even these circumstances are described with some humor, and that wonderful British coping attitude. She tells Robert about her doctor husband Charles:

But Charles is one of those people who like what is called good, simple English fare, which means two nice lamb cutlets, followed by kidneys on toast, and in case the news has not reached you on your far-flung battle-line, Robert, I may as well tell you that kidneys, though not actually rationed, are more precious than rubies these days. Though he is far too noble to grumble, he does look a little wistfully at the unlikely-looking dishes which are put before him.
'What's this, Henrietta?'
'Well, dear, it's a tiny teeny little bit of mutton mixed up with some spaghetti and tomatoes.'
'I see.'

I was lucky to be one of several winners of Henrietta's War in Elaine's drawing. These are her words:

Bloomsbury are considering reprinting the second book, Henrietta Sees it Through and this would be simply marvellous, but they are a publisher not a philanthropic society and much though they might wish to do this, it all depends on the reception/sales of Henrietta's War. Therefore, I now declare I am A Woman on a Mission to make sure that this gorgeous book reaches a wider audience and that sales increase. Anything this blogger can do she will....

She warned us that if our names were drawn:

There are conditions attached to this, however and they are as follows:

if you win you must read immediately and fall in love with on the spot [I did!]
if you have a blog you must write review and rave straight away [a little late, but here it is]
if you do not have a blog please email all your friends, family, neighbours et al and tell them how wonderful it is
if you are in the habit of reviewing for Amazon then please do so [I'm not in this habit]
If you are not, then start immediately with Henrietta's War [have to say no to this one]
Write to the Bloomsbury Group and tell them how wonderful this book is and please reprint the second[I fully intend to]
And if you don't want to do any of the above, then there is no hope for you at all..
Yes I know, I am going over the top but this is just a super duper book, witty, beguiling, funny and full of razor sharp wit and pathos and I want everyone to love it as much as me so you will just have to put up with my bullying.

And here is Elaine's review. Because she included some of the delightful illustrations, I'll let you go over there and see them, rather than post them here.

I love this book. It has quickly joined the list of my all-time favorite books. I shall read it again and again as time goes by. Oh, it is wonderful.
Posted by Nan