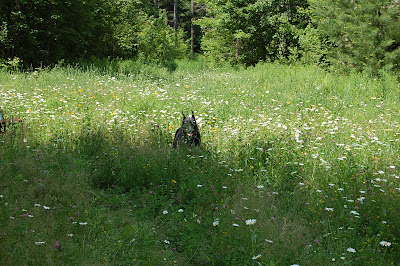 Look at our Sadie run! Ears blowing in the wind as she flies through the wildflowers.


Well, when she was a little one she couldn't do this. At first we thought she just had 'funky' legs - that she just ran funny, but as she grew to maturity, we realized that she had real problems. It was hard for her to get up when she had been sleeping. She couldn't really run. The vet thought there was probably some arthritis, but gosh, she was awfully young for that to set in. Then we found this stuff at the health food store. The owner told us that people swore by it. So we gave it a try, and it worked like a miracle cure. At five years old now, she is so much better than she was at one or two. It is pricey, but so very worth the cost to us. We are quite sure she would have had to be put down by now if she had continued on the way she was. You may read more about the product here. There are different flavors. The smell is quite alluring to the dogs, and they love the taste. Since Ben doesn't need it, Tom does what he calls 'the sleight of hand' each evening. He gets out the sea jerky and also a couple dog bones. He rubs the dog biscuits with the sea jerky strip, and Ben gets them while Sadie gets her medicine.