The Comforts of a Muddy Saturday by Alexander McCall Smith 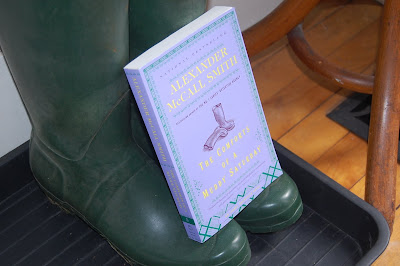 44. The Comforts of a Muddy Saturday - fifth in the Isabel Dalhousie series
by Alexander McCall Smith
fiction, 2008
finished, 9/27/09

When I read an Isabel Dalhousie book, I am in Edinburgh. I walk the streets with her, I go into shops, I spend time in her wonderful house, and mostly I think. And mostly, that is what Isabel does. A blogging friend told me she felt the pacing was slow, and I wrote her back and said:

'It is SLOW. If you don't like slow, you probably won't care for the series. She walks around, she thinks, she works, she thinks, she gets involved with people, she thinks.' For me this is just perfect. I've never come across a character I could identify with as I do Isabel. I think all the time. I wonder, I ponder. My brain hardly ever stops. I try to get things right. Isabel works really hard to do the right thing, to say the right thing. Here is an example of Isabel thinking about two words many of us leave or receive on a voicemail or text or email most every day:
To say on the telephone, Love you, as she heard people doing, was dangerous, or so Isabel thought, because it made the extraordinary ordinary, and possibly meaningless. ... It was significant that it had already been shortened, and the I had been dropped. What did that mean? That people were too busy to say I love you, or too embarrassed by the subjectivity of the full expression?

Although I've sometimes read these books described as a 'detective' series, I don't see them that way. In each book, there is at least one problem Isabel must deal with. In this book she is asked for help by a woman whose husband has been accused of something which has made him so ashamed that he never leaves the house. An ongoing subject is the philosophical review publication she edits, the Review of Applied Ethics. This involves more thinking about important ideas, as well as deciding which articles are worthy of publication.

The books should be read in order since life changes for Isabel, which is why I am purposely not talking too much about it. If I were just beginning the series, I wouldn't want to know what was going on in book five. All I will say is that I find these books magical, fascinating, intellectually stimulating, and emotionally meaningful. There is serious thought, and there is quiet humor. The characters are mainly kindly souls going about their lives in this wonderful city of Edinburgh.
Posted by Nan