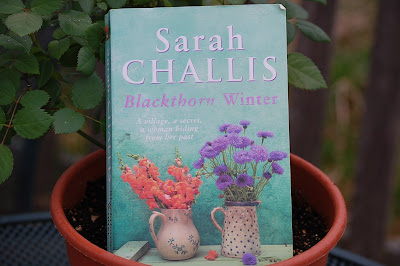 References to a 'blackthorn winter' are the bookends to this story. At the beginning of the book a man overhears people complaining about the April weather and says:

Blackthorn winter. That's what it is. Get a cold snap when the blackthorn's out and folks reckon it's colder than the winter proper. Won't be spring till the blossom's finished.

And at the end, the main character says:

The blackthorn's out. Have you noticed? Tom Atkins told me ages ago, before I'd moved into the village, that when the blackthorn has flowered, the season has turned and the cold days are done.

Though I tend to be rather obtuse when it comes to metaphors, I think this describes the emotional period of time Claudia goes through in a journey toward her own particular springtime, rebirth, renewal of life. When the book begins, her husband is in jail for some sort of fraud and has been living with another woman. To escape the scandal, Claudia buys a country home in a Dorset village. She goes back to her maiden name, and doesn't reveal her past history to anyone.

Blackthorn Winter nicely brings full circle the English village stories I've read this year. From the 1950s of Miss Read to the 1970s of Sheila Radley to the present day of this book. The concern I voice in my book report on Village School is addressed in Blackthorn Winter. I had been musing about what would happen if a non-white, non-Anglican moved into Miss Read's village. Fifty years later, of course this has happened. A woman's grandchildren are coming to live in the village along with her widowed son. They've lived their lives so far in Hong Kong, and are part Chinese. She is asked if they think of themselves as Chinese or English, and says in reply:

I don't think either in particular. So far, it hasn't really mattered. They've been used to a very international community in Hong Kong and they go to international schools. It will be different when they get here. That's the only thing which slightly concerns me.

In another part of the book, a young girl 'traveler' hates going to the village school because she is bullied and made fun of. She is happier when she goes to the larger regional school and notes that because there are two Chinese children not so much attention is given to her.

There were a couple of Chinese kids from the takeaway and even a few refugees from somewhere or other who hardly spoke any English so she wasn't the only one who wasn't, like, normal.

When Claudia's past finally becomes known in the village, she fears the response. An older new friend tells her,

Of course you'll be of interest here. That's inevitable, but it will be of a fairly restrained nature, I should say. People will talk for a while and you'll be pointed out as the woman whose husband is locked up. I don't think the village will ever forget that, but you will be accepted for what you are. Villages have changed. They're much less insular now. We have unmarried people living together, children born out of wedlock, even women cohabiting - all unthinkable twenty, thirty years ago.

Many of the wonderful aspects of village life still remain: the harvest festival, the nativity play, and best of all a real sense of neighborly kindness. There is a pulling together in times of trouble. The villagers are interconnected and dependent upon one another.

I don't know when I've read such a pleasant, interesting story. I believe the term is 'thumping good read.' Now that I've finished, I find myself wondering about the characters and the futures which were hinted at toward the end of the book. I wouldn't mind a sequel. I enjoy this village and its people. They have their strong points and failings, as do we all. And one of the great joys of Blackthorn Winter is that it is a book which features all age groups, from children to older people. It was wonderful to see all the different perspectives.

Sarah Challis' descriptions of people, the landscape, and house interiors is really terrific. She has a gift of bringing the reader right into the scene. Here she describes one of the villagers:

Julia Durnford clearly belonged to that dying breed of Englishwoman who could, given enough scope, sort out most of the world's troubles. The dreadful refugee camp she had seen on television last night with filthy tents and no water and gaunt silent mothers cradling crying children, Julia would have them all rehoused, cleaned up and sitting down to a square meal with no elbows on the table in no time at all.

Penelope Keith's character in To The Manor Born comes to mind.

My only small hesitations with the novel, and they are strictly personal, were a couple of animal situations which I could have done without. They did further the personal relationships and plot of the book, but I think there could have been some other devices used instead. I managed by skimming over the few pages. Otherwise, I loved the book and look forward more by Sarah Challis. I found a great article on her here. I thank my internet friend Carole so much for sending me the book and introducing me to a brand new author.

You may read another review of Blackthorn Winter.

A fellow-blogger kindly sent me this photograph of blackthorn. 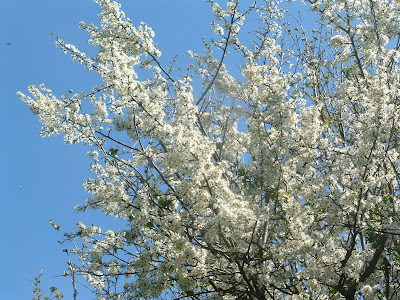