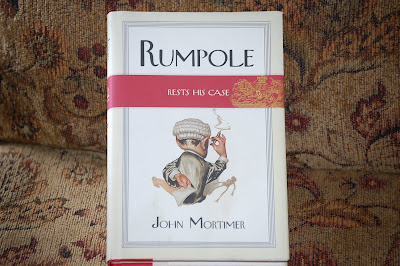 I've been mulling over this book report on Rumpole Rests His Case by the late, and sorely missed, John Mortimer since I finished it on April 12. And here I find myself writing on what would have been Mr. Mortimer's 86th birthday. This is the second time I've written about a beloved author without being aware that it was a special date. The first time was last July.

I've been thinking about just why I enjoy these books about Horace Rumpole, the London barrister so very much:

First and foremost is his belief in the 'Golden Thread' - the presumption of innocence until proven guilty, which guides his life's work.

His cheroots, which he grudgingly smokes outdoors in later books.

His love of William Wordsworth and Arthur Quiller-Couch. Because of Mr. Rumpole, I bought myself The Oxford Book of English Verse 1250-1900, edited by Mr. Q-C in 1912. It is a used library copy which cost me maybe a dollar. It should have cost a thousand. 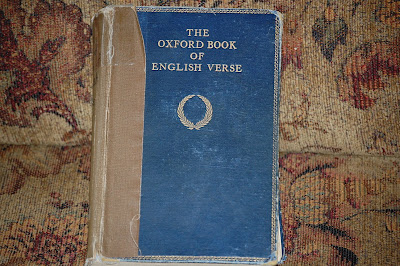 The Timson family, those 'minor villains' who have kept Rumpole in business all these years.

All Rumpole's colleagues at 3 Equity Court, especially Phillida Erskine-Brown, née Trant, 'the Portia of our Chambers.'

These are familiar details in almost every book, yet each story is as fresh as a new day. In Rumpole Rests His Case, we are offered several situations for our reading pleasure. He deals with prejudice in Rumpole and the Asylum Seekers; he has a client who confesses to a crime he didn't commit in Rumpole and the Actor Laddie; and most alarming is the last chapter called Rumpole Rests His Case in which Horace has a heart attack in court. Often a current case mirrors or connects somehow with what is going on at home in Froxbury Mansions. Because Hilda 'stores old newspapers, sometimes for months on end, in case she should suddenly need to remember a recipe, or a new way with a cashmere scarf, or some juicy slice of gossip,' Rumpole is able to find a photograph which helps him in his work. Hilda's friendship with her old school chum, Dodo Mackintosh, a recurring character, aids him in another case.

Though there is humor, these aren't funny books. Serious matters are introduced and crimes are committed. Life with Hilda is not so cheery. Yet within their pages, this reader feels comfortably at home. I have begun to think that I love Mortimer's Rumpole even more deeply than Wodehouse's Jeeves, Bertie Wooster, or Emsworth.

Over the course of this blog, I've posted a couple of Horace Rumpole quotes here and here.
Posted by Nan