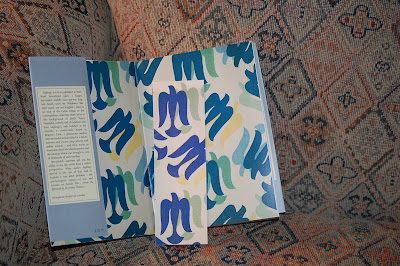 Because I've had trouble getting a clear photograph of the other two Persephone books I've read, A House in the Country and Miss Pettigrew Lives for a Day, I decided to focus on the endpaper. One of the trademarks of these beautiful editions is that each book has its own special endpaper and bookmark.

Endpapers taken from 'Aircraft' a screen printed linen and rayon fabric by Marion Dorn for the Old Bleach Linen Company 1938, reproduced by courtesy of the Trustees of the Victoria & Albert Museum

sapling
noun
a young tree, esp. one with a slender trunk.
poetic/literary - a young and slender or inexperienced person.


Reading Saplings so soon after two of the Melendy family books, reported on here and here, was a startling experience. There were the Melendys safe in America; their father with an undisclosed but definitely not dangerous job. Their mother had died many years ago, but the caregiver Cuffy has done an excellent job as a mothering person in their lives. Their father is away a bit working, but when he is home he is a very loving, supportive man who gives guidance and encouragement to his children. The four Melendys are deeply happy and secure.

Compare this to the poor Wiltshire children, who even before the war have their troubles. The mother Lena is superficial, and her children are mostly decorations. She is the type often derogatorily referred to as a 'man's woman.' Her husband Alex is her main interest with the children a far-off second. She is actually annoyed when her husband takes time away from her to be with the children.

With war imminent, the children go off to live with their father's parents in the country. Alex says:

I'm not going to point out that other people's breakups [of families] are worse. You know for yourselves that you going to your grandparents is a different cup of tea to young Tom and Mary Smith evacuated with labels round their necks to strangers. ... I want you to see yourselves as part of the nation. ... nearly everybody, including the children, are doing what they have to do without fuss.

And so it begins. The 'breakup' of the family. The dissolution of ties between child and parent, and child and child. Even the grandparents' house isn't what it was. Two evacuee children have been brought there. This older couple, used to their quiet ways in the retirement years are stretched. The emotional care of the children is neglected because of too much work. The children, Tony, Laurel, Kim, and Tuesday are thrown onto the seas of misunderstanding and fear and insecurity.

More than sixty years on, most of us know the Second World War only through documentary footage. The brave Londoners coping so well. The children off to the safe countryside away from nightly bombings of the city. Never before have I read about the actual pain - the stories of what this war in England meant to people. There's a character, a governess named Ruth who is greatly loved by the children. We learn some about her past, and see a little of her present life, but mostly she is there as an observer. She tells the reader what is going on in the family unit. This is a deeply psychological novel; so much so that I sometimes felt the characters were more case studies than real people. It isn't a fun book to read. It isn't an easy book to read. There is much cruelty inflicted on the children by adults who should be taking care of them. This comes mostly in the form of verbal abuse. Criticisms that are voiced either to the child or within his hearing. I was angry at so many of the characters. There was such disregard of the children's feelings.

In addition to the subject matter, I didn't think the writing was particularly good either grammatically or descriptively. The characters remained just that. Yet, I read all 361 pages. I'm not sure what kept me going. I didn't know while I was reading, and I still don't know now. I'm happy to have made the acquaintance of the children. Perhaps I stayed with it because of my interest in that time period. I learned a great deal about what evacuation did to families, even when no one died, and I learned about the children's lives who stayed in London. But it was not a soul-satisfying book. It was sad and painful, but so much of that pain could have been avoided if only there was more compassion shown to the children. Still, I am glad I read it, and I thank my English friend Carole for sending it to me. I will happily pass it along to anyone who would like to read it. You may leave a note saying you want it on any blog entry today through Tuesday,April 7. I'll draw a name on Wednesday, the 8th. I'll send it anywhere.
Posted by Nan