Home For Christmas by Susan Branch 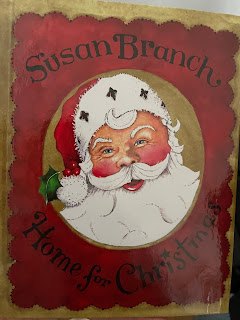 This is a wonderful, delightful reminiscence of Susan Branch's family Christmas in 1956. She was inspired to write it after reading a book last Christmas to her five and seven-year-old nieces.

The book I chose for the girls told the tale of a grandmother describing to her grandchildren what Christmas was like when she was young, a passing of memories that took us back in time. I've always loved stories of life in the "olden days," hearing the jingling livery of a horse-drawn carriage, the sound of long skirts sweeping the floor, a teacup settling into a saucer in Emma's garden ... it's the closest thing to time travel I know.

I'm like that, too. I've always loved stories from the past. And Christmases in older times seem so special to me. 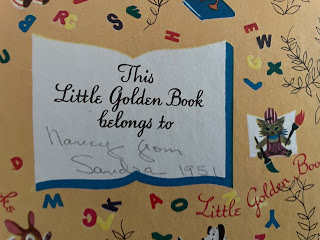 Somewhat shockingly I must admit that Susan Branch's memories are of "olden days". Shockingly because those were my childhood days as well as hers. She was nine and I was eight in 1956. I tried to find a picture of me that Christmas but apparently my mother didn't take pictures of every Christmas and occasion in our lives. This fact in itself sets 1956 apart from 2020. Do you know I have over 70,000 pictures (and videos) in my iPhotos on the computer?! Granted they could use some culling - a dozen shots of one daylily for example - but still. I managed to come up with one of me in 1956. Wish I could see what that book is. It almost looks like a booklet of some kind. 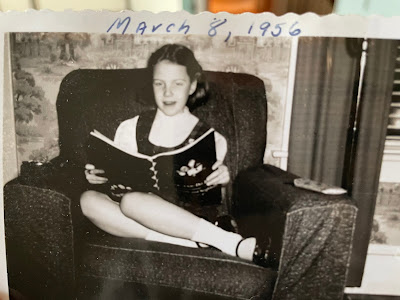 It feels like just about every single thing is different. You don't see many large families anymore. It surprises Margaret when I tell her that I was the odd duck as a kid, being an only child. I can think of just one other in my class. Hazel knows several like herself. Susan writes:

... everything we had was made in America. Milkmen left glass bottles of milk on our porch, gas cost 30¢ a gallon and was pumped by an attendant. There were individual jukeboxes on lunch counters - for a nickel Elvis, Doris Day, Little Richard, or Buddy Holly would serenade you over your banana split. At school we practiced cursive on huge blackboards that covered the walls, and lined up to get our polio vaccines. Girls wore dresses for everything, to school, for roller skating, hopscotch, and cartwheels, too - and every boy on our street had a six-shooter and a coonskin cap. Drive-in movies were wonderful, under the stars, the whole family went to see Lady and the Tramp, us in our jammies. We had rotary telephones and a party line, and the new thing in the living room called television.

This was a middle-class white American family, like so many others in those days.

My dad got a job with General Telephone, so they moved from Long Beach to the San Fernando Valley. That's where I grew up, along with my seven brothers and sisters in a pink-stucco four-bedroom house my parents bought for $16,000 with help from the GI Bill. ... We didn't have a lot of money but just enough, apparently, because we had the basics, warm beds, clean jammies, friends, shoes, grilled cheese sandwiches, and parents who loved us. I always thought we were rich because I felt so happy. ... There wer 53 children living in the twelve houses on our dead-end street, and more coming all the time. ... Bikes made us totally mobile from about six-years-old. Parents didn't worry as long as we told them where we were going and were home for dinner.

But the thing that still lives, that still rings as true as then is the love in the family. I would hope younger people than I am will read this to see that though some external things change, love in a family is timeless.

"Are we rich" I asked my mom. "Not rich in money," she said, "but rich in love. We have each other. That's what counts." It was a highly satisfactory answer. It sounded exactly like "Yes." 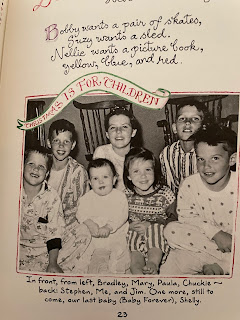