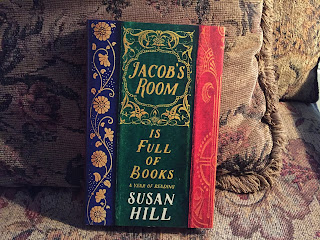 I came away from reading the November chapter thinking how much I like this woman. I so like learning what she thinks about all sort of things. This month began with a mention of a hymn, For All the Saints. If you don't know it, here is a version with the words. I'm not wild about the pictures, but the videos from church services didn't offer words.


Personally, I like it sung just a wee bit faster!


'For All the Saints.' One of the best hymn tunes. As with the Bible and The Book of Common Prayer, you do not have to be a Christian, or even a believer, to appreciate and be uplifted by hearing a church full of people singing something out of Hymns Ancient & Modern. Modern hymns are awful. I don't know why they bothered. If they felt the words were outdated, and so of limited appeal to the young, it would not have been beyond the wit of an Anglican subcommittee to write new ones to old tunes. But no, the baby went out with the bathwater and we got slush and soup and sentimentality.

And to this, I say Amen! This is a subject very dear to my heart. Changing the hymns, changing The Book of Common Prayer, changing the old and beautiful language and for what? Did they really think that young people would come to church or stay in the Church if the language was different? I just don't get it. I grew up in the Episcopal church. I was a child, a teenager, a twenty-something. I never thought, oh, I wish the language was cooler, more colloquial, more relevant, whatever that means. Let's change the language of Shakespeare or Yeats or Wordsworth or Wodehouse so the proverbial young will understand it better. I'll get off my soapbox, but it was nice to hear someone speak about this.

A very funny section that I loved.


There is a shorthand, shared among people who have read the same book more than once, and mostly they are parents. Once learned, the words of the stories stay with you for a lifetime. In the doctor's surgery, I sat near a mother reading to her 3-year-old.

'So Chicken Licken, Henny Penny, Cocky Locky and Drakey Lakey, scurried off to tell the King that the sky was falling in.'

She turned the page.

'You've missed out Ducky Lucky,' I said, beating the 3-year-old to it by a nanosecond.

'All covered in spots,' someone chimed in at once.

Someone else contributed, 'Hercules Morse ...'

We had finished the entire book in the time it takes to drink your morning coffee, (Facebook being the solitary writer's social break in the middle of work.) How many people know Hairy Maclary from Donaldson's Dairy as well as our little gang?

I wanted to raise my hand and say I do! Well, I don't remember all the words, but we read it in this house, and I walked around frequently saying Bottomley Potts. I wonder if the kids remember? I might get a copy for the little ones. 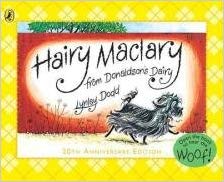 Living on a hill, and not near water, I was amazed to read


There have been morning mists, beautiful soft mounds of it lying over the water, but today there was a dense fog. Apparently, ambulances were not able to go out last night, it was so thick - visibility down to a few yards in places.

Susan Hill, who is in her seventies, writes something all of us who have a few years on us can surely appreciate.


Snow in Yorkshire. Snow forecast nearer here. I hope we are going to get a hard winter. Today the advice of those non-medics employed to nanny us is for the over 65s to keep warm in cold weather, by eating hot meals and drinking hot drinks and wrapping up. I wonder if they ever sit back and ask themselves to whom they are talking? Those of us who lived through the years before central heating, who were not sent out in the morning without having eaten a bowl of porridge, who wore liberty bodices for Heaven's sake, and a vest and a school skirt and a cardigan and a coat with a lining and long socks inside of boots and ... Meanwhile, I sometimes pass school bus stops on bitterly cold mornings and see all the teenagers waiting to be transported to school, without coats and the girls in skirts reaching only to their thighs, hatless, bootless ...

Toward the end of the November chapter, she writes about Christmas lights. Actually this is another thing I have quite a strong opinion on.


The Christmas lights switch on. Always fun, always too early. The lights themselves are hideous, as they all are now, because they are the starry bright white halogen sort, and do that insane chasing round and round. What with that and the electric blue ones, it's enough to give anyone a migraine and epilepsy combined. The churches' lights are always pretty, though, softer, slightly golden - and theirs stay still.

So, you might ask, what does Nan object to in the current Christmas lights? Well, I should begin by saying I am a Christmas traditionalist. I have a real tree. I put it up after Thanksgiving. I have a creche. I play only Christmas music in the house. But most importantly I use the big, hot, primary color Christmas lights. To me they say Christmas. All the other lights I see are small, neon-ish in color, and yes, some of them do chase. I avert my eyes and shake my head. I'm not sure what she means by the "starry bright halogen sort." We have white lights that hang along the porch year-round. We've always called them "fairy lights", I suppose from some reference we read ages ago.Those I love. Not for my tree though.

In light of the news today from England, I thought I'd try and find out if Susan Hill was for leaving or staying. I had a hunch it was leaving. I found a little piece she wrote here, if you are interested. To an American, this divisiveness is much like it is over here between people who are for or against the president. Personally, I don't choose my friends based on their political beliefs. Our very best friends, the people we love best in the world next to our kids, are polar opposites to us when it comes to almost anything political. But it doesn't matter. They know us and we know them. We accept each other, period. No judgement. Just love. (I feel like I'm channeling Gladys Taber here.)

There is only one more month for this book. I'd be very sad if I didn't have The Magic Apple Tree to look forward to.