I read this on wikipedia. 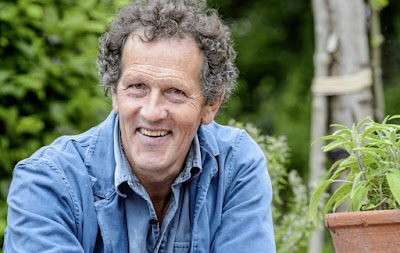 In May 2016, Monty Don revealed that years of gardening had left him with "dodgy knees", from which he was "almost constantly in pain". But he dismissed any suggestion of replacement joints, saying: "Listen, when you get to 60, you ache. Just take it."


Well, I, too have dodgy knees. One much worse than the other. When I was 15, my friend's mother was driving us to a local baseball game when we skidded on wet road and went off into a ditch. They were both uninjured, but I had a broken femur. In those days, 1963, the treatment was traction. I was in it for several weeks, and in the hospital for 3 months. Unheard of today. Since then, one leg has been shorter than the other, and I've always had a limp. It has naturally gotten worse as I've gotten older. At this point, one shoulder is lower than the other, and I use a cane when walking long distances, and a knee brace most days. But, just like Monty, I shall have no operations or replacements. I accept my pain without (much) complaint.

And by the way, I am more than excited that Britbox is offering the 2018 season of Gardeners' World. I watched the first episode and it was just lovely.
Posted by Nan