At Seventy - month one 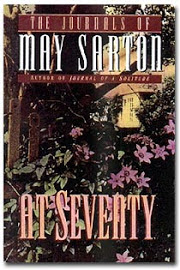 I began this book on my 70th birthday, February 25. May Sarton's journal begins on her 70th birthday, May 3, 1982. I thought it would be fun to read the thoughts of someone exactly my age as I go through this year. I was going to try to read the corresponding entry every day but decided instead I would read the month she was in while I am in it.

Her life as she begins her first year of her seventies is quite different from mine. She is unmarried, lives alone, has no children, and is a renowned author. Yet she is a woman, she loves to garden, she is a reader, and we are the same age.

She doesn't spend a lot of time thinking about the age she is, just as I don't, but sometimes it pops up in her writing.


What is it like to be seventy? If someone else had lived so long and could remember things sixty years ago with great clarity, she would seem very old to me. But I do not feel old at all, not as much a survivor as a person still on her way. I suppose real old age begins when one looks backward rather than forward, but I look forward with joy to the years ahead and especially to the surprises that any day may bring.

Isn't this just wonderful? If I'd read this at 20, I would think, "that's just how I want to feel when I'm old!" And I do. I think the "old" word still startles me a bit. I'll be reading along in a book when someone is referred to as "old" or "elderly" and I am amazed the person is my age or even younger. It is all so relative, isn't it? When I turned 50, my son Michael gave me a mug that said, "older than dirt." I'm hoping to give it back to him on his 50th in 2035!

The month before her birthday, May Sarton did poetry readings, and a talk about old age, in which she said:


"This is the best time of my life. I love being old. ... Because I am more myself than I have ever been. There is less conflict. I am happier, more balanced, and (I heard myself say rather aggressively) more powerful." I felt it was rather an odd word, "powerful," but I think it is true. It might have been more accurate to say "I am better able to use my powers." I am surer of what my life is all about, have less self-doubt to conquer ...

I feel much the same way though that good feeling has come from the arrival of these grandchildren. I was never a woman who worked outside the house. Luckily we could get along on one salary, and I didn't have to. But I've never been ambitious or had other things I wanted to do. My whole mantra of living is that it isn't what you do, but who you are. It wasn't easy sometimes. I know that some people thought I wasn't quite enough because I didn't have a career. Though I knew that my "career" was taking care of my children. I wasn't bored or despairing of the time I spent with them. And now, there are these little ones who bring a very different kind of joy to my life. My kids didn't think I was a goddess, but I sure feel like it sometimes when their kids come running out of a house to greet me, calling, "Nana, Nana." Or when Hazel crawled into bed with me one early morning she came in the house and I had just woken up, and said, "I love you, Nana." I remember saying when I wrote about watching A Child's Christmas in Wales after two of the three kids had been born that "This might be the last great gift of a lifetime - the grandchild (or great-grandchild) who hangs on your every word." And I said that I now understand the tender look on the grandfather's face when he sees his grandson sleeping. "The love, the amazing, amazing love for a grandchild is in his eyes."

After a busy month, involving much gardening, May says,


This garden is really too demanding for me at this stage in my life, but I know I shall never be able to restrict myself there. It has to be accepted that gardening is a madness, a folly that does not go away with age. Quite the contrary.

Yes, that is me alright. I wrote a few years ago about cutting back on the vegetable garden, and one year growing no veg at all, and then going back to a new garden in a new place. I think about it all winter, what I want to grow and where I want to put all those daylilies that must be divided. And there again the grandchildren come into my thoughts. I want them to see that their grandparents are still growing things, just as their younger parents are. I want them to know that being older doesn't mean you stop, though you might slow some, and might sit down while they are playing. But you, my dear readers, might enjoy seeing Tom and I run, yes, run around the house playing various roles that Hazel assigns us, or playing games with Campbell and Indy. Yes, we are tired when they go home, but not ever are we those grandparents who say that the best thing about having grandchildren is that they go home. How we absolutely hate that saying. I could see them every day and still feel a little sad when they go out the door!

I'll close this first month of being seventy with some words May wrote at the end of her month.


I sometimes feel old these days when I am suddenly made aware of the little time ahead. It came to me with a sharp pang when I found myself saying, as I have done every spring for years, Houseman's

And since to look at things in bloom
Fifty springs are little room
About the woodland I will go
To see the cherry hung with snow.


But I have at most ten or fifteen springs! Is that possible? Almost a lifetime gone. On the other side though, what I do have is seventy springs in my head, and they flow back with all their riches now.

I'm really enjoying this book, and it is good for me to travel along with May during this year.
Posted by Nan

Labels: At Seventy - May Sarton