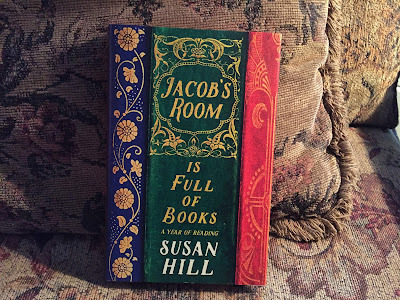 I have read Susan Hill's other book about books twice. Howards End is on the Landing is one of my all time favorite books. I've written about it twice in my letters, here, and here.

Because Jacob's Room is Full of Books is divided into months, I decided to read it that way. But I'll tell you, it was very hard to stop when I reached the last page of January!

Again, I feel like this woman is inside my head. I called to Tom twice as I read her January entry because she put into words thoughts I've had for a long time.

One is about the Kindle.


I had a Kindle. I read books on it for maybe six months, and then I stopped and went back to printed books. I did not do this for any reasons whatsoever other than organic ones. I prefer holding a real book.

But this is the part that got to me.


I gave up reading on a Kindle because I found I wasn't taking the words and their meaning in, as I do those in a printed book. They went in through my eyes but seemed to glide off into some underworld, without touching my brain, memory or imagination, let alone making any permanent mark there. I was puzzled by this, until I learned that if we use an e-reader or a laptop before going to sleep, our brains are affected so that we are more likely to sleep badly. It is something to do with blue light. I've forgotten. The e-reader is cold, and what I mean by that I cannot put into words or explain. I can only feel that it is the right way of describing the experience, as against the warmth of a physical book.

Well, even though she says she can't really explain, I understood. I have gone on probably too much in various blog entries about my relationship with the Kindle. I began using one, and a Nook, though I didn't like it as well, for one reason alone. Well, really for two, I guess. The first was because I got a shoulder injury from lying on the same side, holding my book the same way. It was so bad that it was a few years before I could sleep on that side again. The little e-reader is perfect. It just sits there and I don't have to do anything but 'turn' the pages. So, for that I am completely grateful that it exists. Before the Kindle, I listened to audio tapes for years and years. Yes, tapes. Once tapes weren't around anymore, I tried books on CD but I couldn't control it like I did the tape. I'd go too far forward or back. I know a lot of people now use their phones and listen via Audible or some other company, but I just can't do it. I'm not a phone person. I don't have many apps. I use it mainly for texting and photographs. I have Instagram, but I don't have Facebook on my phone. I hate doing searches or going to web pages on the phone. I like my big screen on the desktop computer.

My second reason why I am so very grateful that e-readers exist is all the old books that are available for them. Books I used to search all over the internet for, and often not find, are right there in the Kindle store. I have discovered so many older authors and my reading life is much, much richer.

Still I understand what she means about not "taking the words and their meaning in." I simply don't remember what I read on the Kindle as well as what I read in print. Maybe it is the blue light thing Susan Hill talks about. When I'd fall asleep listening to audio books I never had this trouble, so it can't be drifting off as I read on the Kindle. I remember the audio books almost better than print books. " 'Tis a puzzlement." But I feel like I understand a bit better after reading her words.

The second time I called Tom into the room, she was talking about May Sarton. Now there's an author I've always thought I 'should' like. I've read a few of her books, and try as I might I don't like them much and I especially don't care for the author, but yet, I continue to read her occasionally. Susan Hill is re-reading Sarton's Journal of a Solitude.


I have never known such a self-regarding, self-indulgent author. Yet isn't writing a journal bound to be an outpouring of self? No. I can think of so many diaries and journals that of course are about the writer and her or his life and experiences, feelings, thoughts, beliefs, friends... but which do not seem self-centered in this way. May Sarton was, by all accounts, including her own, the most infuriating woman to know. She believed she was a major poet, that poetry was her form. She was wrong. She thought she was a fine novelist. She was an OK one. How harsh this is. But she is dead and cannot read me.

She was a woman tormented by her own temperament, by her rages, storms of tears, hysterical outbursts, jealousies, passionate, possessive love affairs with other women; a woman who complained about the interruptions from her readers, her friends, her daily domestic routine and said all she longed for was to be left alone with her art. But when she was, she was lonely and miserable and craved company, as she had always craved attention and affection. Her well was so empty, no one could ever fill it.

But I am enjoying this one of her journals all the same. She has an eye for beauty, an ability to describe a sky, a snow storm, a plant, a bird, a wild cat, the antics of her parrot Punch, so that one is there with her, and she was respectful of her country neighbours, whose lives were rough and poor and harsh but who had a dignity and a pride in manual work and an honesty she valued.

There you have it. I quoted the whole portion on May Sarton because she is writing what I've so often thought. And yet, we both keep reading her for those reasons in the last paragraph. If you type her name into my search bar, you will see several poems I have put up over the years. I do like them, and she does capture the natural world in a way that I admire. I've waited for many years to read a book that I plan to begin on February 25, the day I turn 70, May Sarton's At Seventy.

The January entry isn't all about books. Susan Hill has a wonderful section about a particular type of British comedy, " the sort of humour beloved of old-fashioned vicars and their wives." This American had never heard of Joyce Grenfell or Flanders and Swann, but I will be looking them up on YouTube.

Walking outdoors and seeing a woman picking up trash reminds her of a friend of her aunt's who, in her retirement used to go out for two hours each day doing the same, "with a black sack and a stick with a prong on the end." And then as she remembers this woman, she thinks of two women who taught at the same school, one of whom is the poet U.A. Fanthorpe whom I have heard of, and her partner Rosie Bailey, whom I haven't. More to look up.

She ends by telling the reader that she receives many questions from prospective writers on how to write. They all want to know how to do it. I won't tell you how she writes, but she ends with, "I would never achieve an MA in Creative Writing."

I've been wondering why it was hard for me to stop at the end of January, but not hard for me with Gladys' book. I think the reason is that though Gladys Taber writes of many things, she does spend a lot of time on the actual weather and life in a particular month. Susan Hill mentions the outdoors a little, but mostly she is writing about literature and people and memories. I did love this bit.


The last day of January, apropos of which a friend said, 'Now that can't be bad.' Yes and no. Yes, we are on the right side of the year - a little lighter in the mornings and evenings, more birds singing. And yet February and March and often April ('the cruellest month') can disappoint, and even May can be wet and windy and cold.

Although I didn't re-read Howards End when I read Howards End is on the Landing, I do intend to re-read Virginia Woolf's Jacob's Room this year. I haven't read it in a very long time.
Posted by Nan