I think that for a lot of us, the days beginning after Christmas into the middle of January are pensive ones. We take stock of our lives. Some people make resolutions. It is usually a quiet time after the bustle of the holidays. We might feel let down, or we might feel that it is a restful time. I'm in the latter group. I love every single minute of the time between Thanksgiving and Christmas. I love the shopping, the planning, the decorations, the music. And then between the 25th and New Year's Eve, I love putting the house back to 'normal,' having that blessed silence that comes after commotion. Gladys says,


It is a good thing to curl up with a book for a little while before bedtime. I like James Russell Lowell, saying, "Solitude is as needful to the imagination as society is wholesome for the character." We all need to spend some time alone; people who cannot bear their own company for a time have thin souls.

The deep part of winter gives most of us a little more time alone. The natural rhythm of time has changed from that of summer. But instead of dreading the dark winter days, we ought to savor them for what they can give. Now there should be time to reread old books, to absorb some philosophy, to play a whole symphony without hurrying.

She begins her January entry with memories of her own childhood winter days, when "no one had ever heard of organized winter sports." Gladys and her friends would hop on a bobsled pulled by a horse, and ride all around town. "The boys fell off and scuffled in the snow and threw snowballs, and if a boy was really wild about you, he showed his ardor by putting snow down your neck."

Now, I've never made oyster stew or eaten it, but this is a recipe you would probably never read today.


Oyster stew was really oyster stew then. Mother made it by melting half a cup of butter in a big, heavy pan. She added a quart of oysters and let them just come to a boil, then poured over them three cups of milk and a cup of cream, a teaspoon of salt, a half teaspoon of pepper. This simmered until the oysters began to rise to the top; then it was served with parsley, paprika, and often more butter on top.

Nowadays people would cry, "too much butter and cream." But think about what is served in restaurants - french fries with gravy as a side to a huge hamburger. I can't help but think that is just as unhealthy, perhaps more so.

As is so often the case when I read Gladys Taber's words, I hear my own thoughts echoed. Thoughts I didn't know anyone else had.


Here is a strange thing. In summer I always make plans for those long winter nights. I say blithely, "Well, in the long winter evenings I am really going to learn to knit socks. There will be time, then, to reread all of Shakespeare and the Elizabethan poets." On a long winter evening we can refile the phonograph records, straighten the game cupboard, and really throw out those incomplete checker sets and nibbled [my words -by what, mice??!] game boards. A thousand small, niggling jobs we can dash off, I think, in winter.

Every single year I go through this happy reasoning and every year, in surprise, I face the fact in January, that those long winter evenings are pure fiction.

... What does become of those evenings? I often wonder. Because I find myself, in January, saying cheerfully, and with hope, "Now when the summer evenings come, and it stays light so long, I can really catch up with those odd jobs. I'll just wait for summer."

Gladys Taber was a highly educated woman, especially for her time. She was born in 1899, got her Bachelor's Degree from Wellesley and a Master's Degree from Lawrence College. She later taught at Columbia, and this book sees her commuting from New York City to Stillmeadow. I read that in 1935 she began living in Connecticut full time.

Most (all?) of Gladys' books are illustrated by Edward Shenton. Here is January's. 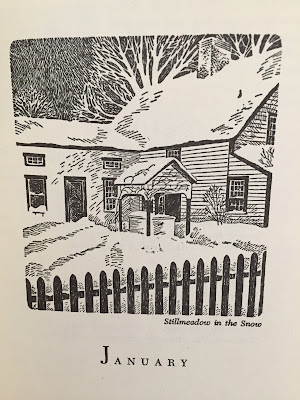