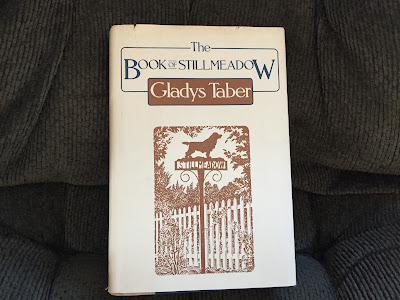 It is set up in monthly chapters, and that's how I'm going to read the book. I did much the same thing in 2011-2012 when I wrote about a book by Gladys and another by Rachel Peden. You may find those posts under A Year with Gladys and Rachel.

The book begins in November. Though so many people don't care for this month, it is one of my favorite times of year. I like the opening up of the woods, the quiet, the early darkness. Outdoor work isn't calling me and I can focus more on the inside, both of the house and my own inner self. It is a time for reflection.

There is an introduction telling the reader how Gladys Taber ended up at this old farm in Connecticut that she named Stillmeadow. It's a lovely name, don't you think?

I've always loved books about city people who pull up stakes and move to the country to make a life there. Mostly they don't have a clue what they're doing, and yet they daily come to learn all they need to know. I believe the first series of books I read about this was Derek Tangye's books about moving to the Cornish coast and growing flowers. I mentioned him in one of my early postings. If you've not heard of him, this is a good starting place, and there's a wonderful Facebook page.

Gladys and her friend, called Jill in the books, were both married with children and living in New York City apartments when they began to dream about a place in the country. They thought at first that it would be a weekend place, but it became their life and the source of Gladys' many writings over the years.


I began to keep a kind of diary the year we found Stillmeadow. There were so many things we wanted not to forget and the family liked a journal to refer to. Sometimes it was recipes, directions for doing over the old furniture we had bought at the auction, notes about the puppies. And sometimes it was my own thoughts, a record of country living. It turned out to be a kind of potpourri of happenings at Stillmeadow.

And after nine years, it was filling so many scrapbooks that the cupboard was full. So I made a selection of the parts that would represent our life in the country and copied it out - a staggering task.

And now we have the Book of Stillmeadow.

As she begins the November entry, I was rather amazed to read something quite similar to what I wrote in my very first blog post. Had I read it in another Gladys' book, or did I come up with that thought myself??


At night, little faraway houses, never seen in summer, suddenly prick the dark with their lamps.

She writes, "All the browns, a thousand browns, come out. Rust-brown, sand-brown, topaz-brown, and the faded gold of harvest fields." And she notes that in her Connecticut hills, "This is a peaceful, serene land, and never quite so peaceful as now, with the crops in, wood piled high, houses snugged down, brooks running slow with leaves. The days grow shorter. Dusk comes before we are finished with the day."

I think that's it. With all our capabilities and determination, we are still ruled by the natural world at least to some extent. I rather love it that I am not in charge of how long the daylight lasts. Even with a headlamp, or barn lights, you aren't going to pile wood. You are stopped. If we give November a chance, it can change us in profound ways by giving us the opportunity to look deep and maybe change some things that need to be changed. Things we don't even think about when the sun shines and "the livin' is easy."

In all her writings Gladys moves back and forth from her own personal world to the world at large. When she watched the sun going down,


My heart got to aching for all the sad people all over the world. I wanted so terribly to share the color and the peace and the serene fall of evening and the clean cold air coming up from the water. And I wanted families together, going quietly home at night. This, I thought, is what we must have in this world again, somehow. Not power and glory, not magnificence. Only freedom for folk to work and be at peace in their own lands.

She warns against "things."


Happiness is not upholstered in velvet, nor lighted by the push of a button. If we start a new wild scramble for material luxury, we shall begin a toboggan slide to destruction. I do believe in pleasant living, as much as our means afford - but I wish we could chart a modest course between overelegance and simplicity.

All these decades later and we are still striving. As the Talking Heads wrote, "Same as it ever was." Gladys Taber is a woman for all seasons and all ages. Her words are as meaningful today as when she wrote them. She offers solace and hope to the reader by showing us her deep and basic humanity, and her knowledge of what is important.


The house was warm and inviting when we got home, and smelled of bayberry and burning apple wood. And white moonlight began to sift through the windows. This time of year has so much comfort in it, when all is said and done.