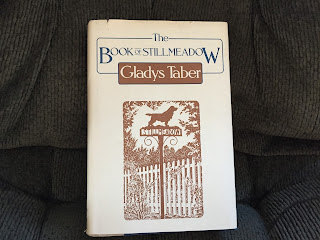 Gladys begins her December chapter with words all too familiar to those of us who live in the country.


Living in the country in winter is not easy. It is not simply sitting by a log fire and reading that good book. It is no life for lazy people.

She goes on to talk about being "snowed in" and losing power. She says the local people call it "the electric."  I have a very vague memory of that term being used when I was a kid, but I sure haven't heard it for ages.

It is never made very clear about when the husbands of Gladys and her friend, called "Jill" in the books, stop becoming part of the scene. I believe both couples broke up. There is one mention in this book of "urging my husband to bring in more wood."

Gladys has wonderful neighbors who do a lot of the strong-arm chores. Even though they have help, I greatly admire these women moving to what was then a kind of wilderness. I imagine Gladys' Connecticut like in the old movies such as Christmas in Connecticut and Bringing Up Baby - rural and remote. In her time it was becoming 'discovered' by various writers and celebrities looking for a simpler, quieter way of life.


and if there is anything a city-dweller can have half as pleasant as a filled woodshed, I know not what it would be.

And all these years later, I still feel this way. We don't have a woodshed, but we have a woodpile, and it is as good as money in the bank. Whatever weather comes our way, we can be warm.

Tom has a step-uncle who lives nearby. He is in his early eighties, and still puts up his own wood. He loves the work. He scoffs at old friends who hire people to do their yard work and then go to a gym for exercise. He would rather get his exercise doing real, necessary work.


When the first snow arrives, I really give myself up to winter. The air comes cold and sharp and there is a quickening in the blood, a feeling that the seasons are rolling around quite the way they should, and all is well.

But in the city, snow is looked at quite differently.


In the city the street-cleaning department looks on snow as a crisis. There is always a terrible to-do over snow in New York. One would think New York was a tropical city, and snow an unheard-of phenomenon. Generally, before the snow is carted away there are various battles. The head of one department accuses the head of another department of inefficiency. Taxpayers write in to the papers about their streets. The mayor issues orders to car owners. The taxis never have chains; they skid into one another and the drivers get out and shout furiously. The snow is loaded in trucks with machines like hay loaders. Finally, as the last load roars away, the weather turns warm and it rains.

Because these essays were written during and after the Second World War, there are occasional mentions of the unease of those years.


Christmas is almost upon us before we get over Thanksgiving. Many simple folk like me are thinking long thoughts as we wrap the packages. We are still waiting for peace. We are insecure, when we have won the war. Civil conflicts exist everywhere, peoples are still starving, Labor and Management are embroiled in half the world. Nations still argue unsolved issues. Race prejudice snakes along every hidden byway.

Gladys' "long thoughts" focus on what individuals can do to make the world better. Loving one another, teaching tolerance to children, having faith in "all the human beings of tomorrow." She is a woman much like any of us today. We hope for the best, we try our best, we try to not get discouraged. There are always more good people than not even if they are never reported on in the news.


I came back from a trip to New York, tired and anxious about all those things which pile up when a housewife goes away. One of those lovely, early snows had been falling for hours, and I drove through a kind of lacy twilight down the winter road. I saw my friend walking away from Stillmeadow along the shadowy path, and she waved and said she had been to the house. I drove on, and there was the house in the sweet twilight of snow, and on the door the Christmas wreath she had carried over and put up. Deep green of pine, cinnamon brown of cones, a spray of gay little bells, and a flash of rosy ribbon.

"This," I thought, "is what I mean by Christmas! To come home, after absence, and find the gracious thoughtfulness expressed, the good and gracious warmth of friendship."