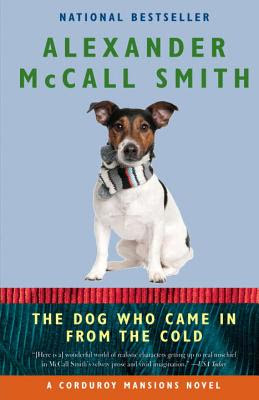 56. The Dog Who Came In From The Cold - book 2 in the Corduroy Mansions series
by Alexander McCall Smith
fiction, 2010
library book twenty-three
Nook book 21
finished 10/30/12


I find the 44 Scotland Street series, and this one, the Corduroy Mansions series to be an odd combination of thoughtful, gentle musings and quirky, barely believable characters. I like them well enough, but they seem like characters, not people. At least I can continue with Corduroy Mansions. I had to give up the Scotland Street books because the antics of the young Bertie (and others) were just too impossible for me to accept as a reader. The characters in Corduroy Mansions - the apartment building where many of them live - are a little more plausible. Yet they are definitely unusual, and the circumstances they find themselves in certainly stretch the imagination of this reader. All that said, I still enjoy the series. It is mostly pleasant, though a couple dog situations weren't. A dog being loaned to a spy agency to monitor the 'enemy.' Really? I would never put my dog in such a weird and possibly dangerous atmosphere. But, like Temperance Brennan in Bones, I am quite a literal person, and perhaps others would more readily find the humor. The philosophical musings and descriptive passages are what make the books appealing to me, and I will share a few of them.


On Saturday morning there were people travelling to see friends for the weekend, grown-up children returning to parents in the country for much-missed home cooking and laundry services, and tourists in search of an England that had once existed but now survived only in the imagination - an England of quiet villages and cricket greens and tiny, silent pubs.

They went upstairs to put their bags in their rooms. The guest room had been prepared for Jo, and there were flowers in a vase near the window. A small tin of biscuits had been placed on the bedside table, and a bottle of mineral water. The comforts of home, thought Caroline. These little touches.

"It's very beguiling, isn't it?" he said. "I never tire of it. Never. It's home, but it never seems to me to be anything but … Well, just the way the world should be, if we hadn't messed it up. The perfect landscape. What heaven will look like, if we ever get there."

Of course Barbara loved London, as so many Londoners did, in spite of their occasional complaints. … she loved its little corners, its poky little shops run by shabby eccentrics, its oddly named pubs, its gardens, its sudden turns of architectural splendor. She loved its extraordinary tolerance, which felt like an old slipper, she thought - as uncomplaining and as pliant as such footgear is in the face of all sorts of pressures and provocations. In fact, London was exactly that - an old slipper that had been home to countless feet and still welcomed and warmed the feet that came to it fresh.  It was not a bad thing for a city to be, when one came to think of it, an old slipper. You could not call Paris an old slipper, nor Berlin, nor New York. Only London.

"You judge these poor girls too quickly," he had said of one of them, a sound engineer from Glasgow. "How can you tell? You really must give her a chance." "But she has a piercing in her nose," Stephanie said. "You must have noticed. And her tongue too." Sorley shrugged. "The world's changing," he said. "Aesthetic standards change, What's unattractive to us may be just the thing for Hugh and his generation - we have to remind ourselves of that, you know."

She was dressed more or less as Barbara would expect somebody like her to dress, sporting as she did an olive-green tweed skirt with a navy-blue cashmere top - the sort of outfit worn by legions of country women in comfortable circumstances.


I hope these passages convey some of the pleasantness, the kindness, and the decent humanity which are hallmarks of Alexander McCall Smith's work. Certainly at least one of his many series will appeal to a reader, and it does us good to be in the company of such a cheerful, warmhearted writer.
Posted by Nan