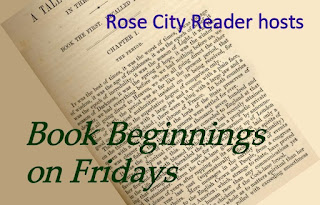 The Volkswagen was parked on the wide sidewalk of the Haarlemmer Houttuinen, opposite number 5, and it was parked the way it shouldn't be parked.
The adjutant* had switched the engine off.
The adjutant hesitated.
He had arrived at his destination, Harrlemmer Houttuinen, number 5, and the high narrow gable house was waiting for him. He studied the gable house and frowned. The house had a body in it, a dead body, suspended. The body was bound to be turning slowly. Bodies, suspended by the neck, are never quite still.

I was intrigued by the last part of the first sentence. It says something about the driver, doesn't it? And then the hanging bodies never being 'still' - just the slightest bit creepy, and something we don't always think about. I love that little asterisk and the information about police ranks. I wish more books offered such details. I've spent a fair bit of my English mystery reading time trying to figure out all the police titles like Detective Inspector and Chief Inspector.

In this 1975 book the adjutant is named Grijpstra and the sergeant is de Gier, and with these words, JanWillem van de Wetering begins his series featuring the two Dutch policemen. The books have been on my to-be-read radar for many, many years ever since I was on the Dorothy L mailing list in my early days on the internet. After I read a posting last month by Peggy I got serious and ILLed the first book in the series so I could finally begin my reading adventures with these fellows. I'm about a third of the way through, and am enjoying it. There are many layers of interest for me: the Amsterdam setting, the policemen who are quite opposite from one another, and the mid-seventies life there. As I've noted before, I really do enjoy reading about a period when it was happening even more than an historical look back from the present day. 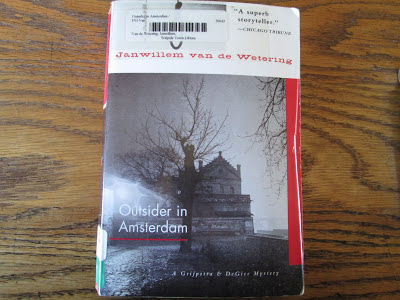 For other book beginnings this Friday, please do visit Rose City Reader.

Addendum: If you go here, you may read Janice's post on the same book Peggy wrote about, The Maine Massacre.
Posted by Nan