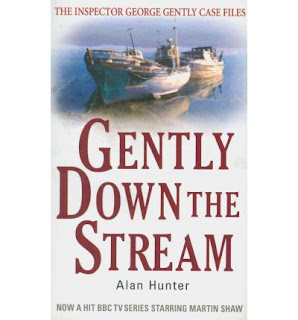 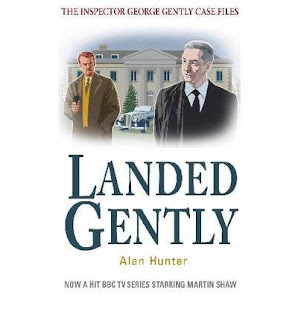 I sort of enjoyed the canal boat emphasis in Gently Down the Stream, but my goodness, Deborah Crombie did such a better job telling about this life in her book, Water Like a Stone. Hunter paints a picture of the people who live on the canal boats as being rather morally loose, but their lack of morality is nothing compared to the rich people in the book. There are silly names such as 'Rushm'quick.' I continued to the end but the book didn't hold my interest, and some (most) of the characters were so unpleasant. I can take this if the sleuth is a compelling person, but we don't really get to know George Gently very well. He smokes, he likes peppermint creams, and he likes to fish. All interesting traits to mention in the stories, but we really need more detail to care about him as a person.

Landed Gently began so nicely that I thought this book, fourth in the series, was going to be the 'breakaway' book; the one in which Alan Hunter's work changed from mediocre to very good. For the first time the reader got a glimpse into Gently's home life. He has lived in the same rooms for 21 years, with a good landlady who isn't stingy about keeping the fires going well. George is a bit dismayed because he has been invited to spend Christmas in the country. He likes his 'rut' as he calls it. He likes his Christmas days visiting a fellow officer and his family. He enjoys the simple pleasures of his home and his pipe.

He has a pleasant train ride with an exuberant American soldier. Query: why are Americans always exuberant, energetic, enthusiastic in these older British books? He arrives and is welcomed into the home of a chief constable and his wife, whose children are grown and living far away. At first I liked this couple, but then I began to not like the man at all. He was flirty with a young girl, he stubbornly stuck to his own views, and was almost a caricature of the British 'what-ho' kind of fellow.

A murder occurs at a neighboring home of a lord, who has quit the House of Lords. He is eccentric to say the least. I settled down thinking oh, won't this be a lovely murder mystery. But it wasn't. It was boring. It was weird. I think the author was trying to show the readers what had happened to the British aristocracy after the Second World War, but I don't believe he succeeded. There was too much talk, too few clues, too little real police work. You may read quite a scathing review here, with which I agree.

Although the murder occurs on Christmas Day, I'm not going to include the book in my list of Christmas books because it isn't important when this particular crime took place. The date was just a vehicle for getting George Gently to the scene.

I think my time with Mr. Gently is over. It has been pleasant enough but I just don't think the books are very good in terms of writing, plot, or characters. There are way too many books I want to read to continue reading books that are just so-so.
Posted by Nan