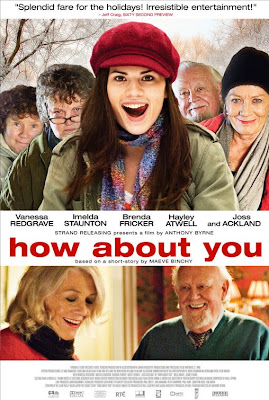 I know it isn't even Thanksgiving yet in the US, but The Christmas Spirit Reading Challenge begins today, and I couldn't wait another minute to write about this movie for the Fa La La La Films section of the challenge. I watched How About You on Netflix Instant a week ago. It is a wonderful, uplifting, and unique film about life in a home for older people.

The movie opens with Bobby Darin's version of the old standard, How About You. This is one of my favorite songs and it is a fun one because singers often change the lyrics; for example, 'I'm mad about good books; can't get my fill' is followed variously by:

In Bobby Darin's version he says, 'Mr. Kennedy's looks' and later 'Mrs. Darin's looks'. I so wish there were a video of him singing it, but you may listen to his version here. The song is on his album, Love Swings which you may buy (as I did) at iTunes for a penny under ten dollars - a great bargain!

How About You is based on Maeve Binchy's story The Hard Core, from her collection called This Year It Will Be Different, which I wrote about last December. I read it again after seeing the movie and though there were several changes, the heart of the story remains. The movie in fact really brings the story and the characters to life. Kate, played by Orla Brady runs a home in Ireland for older people, a residential home with a nurse on the premises. It is quickly failing because of four disagreeable rascals who drive away people who want to live there, and the employees who work there. One of the four is so bad she has been banned from all other elder facilities. These four would be labeled enfants terribles if they were younger! They argue, they criticize, they mock, they demand. And they are played by four of the greatest actors around: 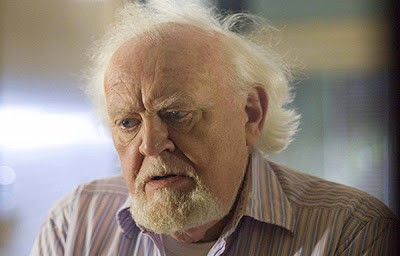 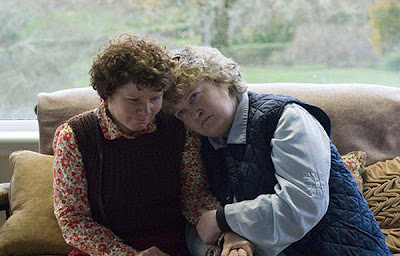 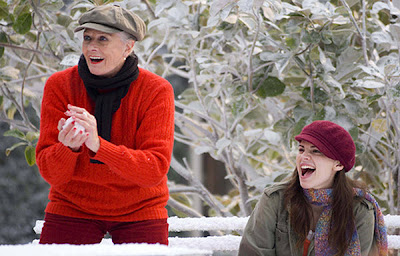 Oh, Vanessa. In her later years, she seems even more beautiful, more luminous than when she was young. In Letters To Juliet, she played a romantic heroine who reconnects with an old lover, who was her old lover in real life, and with whom she has recently gotten back together - Franco Nero. If you are interested, there is a nice interview with them.

In How About You the younger sister Ellie, played by Hayley Atwell has left college because she wants to go around the world with friends and her boyfriend. She has given up her apartment to save money, and so, a bit reluctantly and because she is quite desperate for help, Kate takes her on. She moves in and does cleaning and serving duties. Just before Christmas their mother has a stroke and Kate must go be with her. Though it is against regulations she leaves Ellie solely in charge. All the residents, the nurse, and staff have gone off for the holidays, leaving the four who have no place to go. And that is probably enough said. I want you to be able to discover and experience the joy of this film on your own, as I did.

There may be poignancy in stories of older people but poignant is not the same as tragic. Tragic is the death of a young person. The death of an older person is normal, the way it should be. In the movie, there is one dying woman who looks back at her life and says it was wonderful. She loved her late husband, and with a twinkle in her eye says she hopes to see him again. 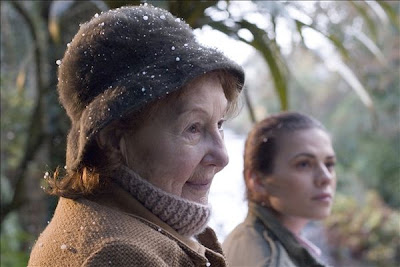 who played the dying woman actually died the same year the film was released.

How About You offers surprises rather than stereotypes, joy rather than sorrow, and new beginnings rather than staying the same. I really loved this movie, and it was a perfect way to begin my holiday viewing.