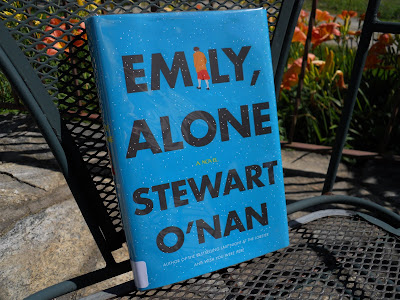 
I think perhaps we are a bit afraid to read about older people or see them in movies because they remind us of what lies ahead. If they are lonely or sad, we tend to think this is because they are old. But really, if we are honest, we must admit that we have been lonely and sad sometimes at any age. When we're forty, we look back at twenty-five as carefree and full of fun. But twenty-somethings aren't always happy either. We have worries and fears and grief at any age. If someone tries to tell you, oh, you don't want to read a book about an older widow named Emily, don't listen. It is exquisite in its portrayal of this eighty-year-old woman. I felt it to be a great privilege to spend time in her company, and when the book ended, I was sad to let her go. I wanted more of her daily life, thoughts, ideas, and feelings. I loved this book beyond words. I shall let some passages tell you more than I can in this book report. The character was introduced in an earlier book called Wish You Were Here, but you do not have to read it first. Because it mattered to me, I thought I'd let you dog lovers know that Emily's older dog, Rufus does not die, and she doesn't either!

As Emily, a widow of several years is preparing to go out, she struggles a while to hitch her necklace. She remembers when her husband was alive.

Over the years she and Henry had made a ceremony of the moment. There was no need to ask him. On formal occasions like tonight he would stand behind her like a valet, waiting for her to finish her makeup. She'd find him admiring her in the mirror, and while she discounted his adoration of her beauty - based, as it was, on a much younger woman - she also relied on it, and as time passed she was grateful for the restorative powers of his memory. No one else saw her the way he did. He knew the eighteen-year-old lifeguard she used to be, and the fashionable grad student, the coltish young mother. When he solved the clasp, he'd watch her regally settle the necklace on her chest, and then with his hands on her shoulders, bend down and kiss the side of her neck, making her close her eyes.

That time of year which is so hard for many of us is described perfectly.

The groundhog was wrong. Spring was at least six weeks away. Easter even longer. It was the dark time of year Emily dreaded, the promise of better weather a taunt as one dispiriting system after another swept across the Great Lakes. Snow, sleet, rain, fog. The sun came out every few days, and the slush melted, only to refreeze overnight, triggering pileups on the Parkway and making their hill impossible. Not even the Subaru could handle black ice, and instead of risking life and limb, she stayed in, the list on the refrigerator growing a second column.

When she and her sister-in-law Arlene visit an art museum, Emily is moved by a Van Gogh painting, Almond Blossom. 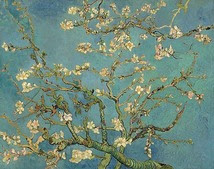 The flowers themselves did nothing for her, but the blue Van Gogh had chosen for the air captivated her - rich and bright, near aqua with a milky whiteness to it, a loudness which would have been laughable on the trim of a house and was nearly an affront here, yet from her first glance Emily couldn't look away. For months she'd been dreaming of spring. Here it was in all its gaudy freshness, made present through the plainest of emblems - a flower, a branch, the sun-warmed air. … How strange that his choice of color, made so long ago, was waiting to dispel her gloom at just that moment. And to think she'd felt it despite the chaos all around her [school field trips]. She couldn't imagine a greater testament to the power of art, and wasn't that why they were there, to have their faith in it renewed?

The joy of summer:

For Emily, the real start of summer was marked not by Memorial Day and its poppies and parades, but the opening of her day lilies. They sprang up with the heat, their long stalks tilting over the driveway, their pumpkin-colored blooms facing the sun, a jubilant crowd welcoming her home. Her garden was in full riot, the alliums looming like pale blue moons above her phlox and sedums and gladioli. One border of Dalmation bellflowers hadn't quite filled in, but on the whole she was pleased. She spent hours hunched on her stool, communing with the elements, pruning and pinching in the hopes of even more glorious results. The sun rejuvenated her, her skin soaking in the vitamin D, and when the phone trilled in the kitchen, she let it ring.

When I finished this book, I told Tom that it is among the very best I've ever read.
Posted by Nan